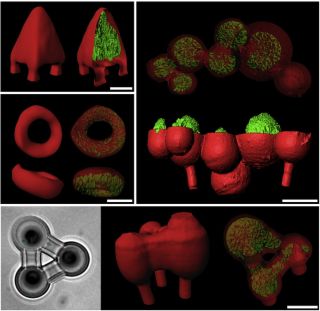 3D printing allows scientists to build their own bacterial colonies in any number of shapes, from pyramids to donuts to spheroids.
(Image: © Image courtesy Jason B. Shear and PNAS.)

Bacteria are often social creatures. Suspended in colonies of varying shapes and sizes, these microbes communicate with their brethren and even other bacterial species — interactions that can sometimes make them more deadly or more resistant to antibiotics.

Now, bacterial colonies sculpted into custom shapes by a 3D printer could be a key to understanding how some antibiotic-resistant infections develop. The new technique uses methods similar to those employed by commercial 3D printers, which extrude plastic, to create gelatin-based bacterial breeding grounds. These microbial condos can be carved into almost any three-dimensional shape, including pyramids and nested spheres.

This 3D-printing technique could be used to investigate questions like "how many bacteria have to be clustered together, and in what size and what shape, in order for that microcolony to start acting differently than the cells do on their own," said study researcher Jason Shear, a professor of chemistry and biochemistry at the University of Texas at Austin. [7 Cool Uses of 3D Printing in Medicine]

Bacterial clustering is important precisely because bacteria bunched together often act differently than a single cell on its own. In some cases, bacteria even cement themselves together and onto surfaces with a gluelike substance, creating biofilms that are stubbornly resistant to antibiotics or the immune system. The plaque dentists scrape off your teeth is a biofilm that can contain dozens of interacting bacterial types, Shear told LiveScience.

More deadly are the biofilms that gather in the lungs of patients with the respiratory disease cystic fibrosis. Antibiotics can halt scattered bacteria that cause lung infections in these patients, but persistent biofilms on the lung tissue lurk, waiting to spit out new bacterial vagabonds. The result, Shear said, is a cycle of infection and treatment that is often fatal for the patient. On average, people with cystic fibrosis live to just their mid-30s, according to the Cystic Fibrosis Foundation.

Understanding biofilms and other bacterial communities is crucial for learning how to breach bacterial defenses, but "really, technologies just haven't been there," Shear said.

3D printing may provide a way toward understanding. First, Shear and his colleagues add bacterial cells to a gelatin mixture, which they then cool to solidify, sort of like how Jell-O is made. The bacterial cells are like the fruit in this Jell-O cocktail.

Using a laser, the researchers then carve out capsules around the suspended bacteria. The laser light causes the molecules in the gelatin to link permanently. When the resulting capsules are warmed, most of the gelatin melts away — but the laser-zapped areas stay put, creating hideouts where the bacteria can breed.

To prove that the method works, Shear and his colleagues created spheres of Staphylococcus aureus, a common bacterium that can cause food poisoning and skin infections. They surrounded the Staph bacteria with a shell of another common bacteria, Pseudomonas aeruginosa. Pseudomonas is a pathogen often found lurking in medical equipment.

The researchers then exposed these bacterial spheres to the antibiotic ampicillin. They found that 80 percent of the Staph survived the antibiotic when surrounded by Pseudomonas. In comparison, only 40 percent of the Staph withstood ampicillin when surrounded by an empty shell. The protection is apparently caused by Pseudomonas' ability to produce compounds that resist the bacteria.

Unlike the genetic drug resistance acquired by bacteria when antibiotics are overprescribed, this communal resistance depends on the colony structure. If the protective wall of Pseudomonas were to disappear, the Staph would again be vulnerable to the antibiotics.

The equipment used to custom-create bacterial colony shapes is pricey, Shear said, but the researchers are working on alternatives, including a cheaper laser.

"As with commercial 3D printing, I think there is a strong likelihood that the cost of the equipment could come down dramatically," he said.

The researchers report their work this week in the journal Proceedings of the National Academy of Sciences.