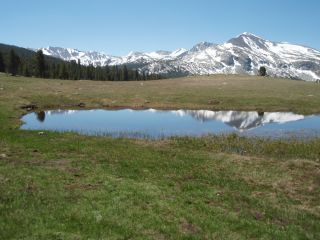 Michael Brune is executive director of the Sierra Club. This Op-Ed was adapted from one Brune wrote for his blog Coming Clean. He contributed this article to LiveScience's Expert Voices: Op-Ed & Insights.

The Intergovernmental Panel on Climate Change was set up in 1988 by two United Nations agencies as a way to collect and disseminate the current best science on climate disruption.

Since then it has issued four assessment reports. Recently, the IPCC began releasing its fifth assessment (known as the AR5). The first part is a "Summary for Policymakers." You can find it here, but there are five things you really need to know about it.

First, the scientific work reported by the IPCC in the AR5 is the gold standard for getting a big-picture understanding of what's happening to the climate. The report itself has 259 authors from 36 countries. They are scrupulous about quantifying the certainty of both findings and projections. This report is the best tool society has for making informed, rational decisions on how to deal with climate disruption.

Second, there is a lot of bad news: Several effects of climate disruption have accelerated during the past decade, such as the loss of Arctic sea ice, the melting of big glaciers and the rise of sea levels.

Third, not only are the adverse effects of climate disruption clearly evident today, they're also speeding up. In fact, 12 of the warmest years in recorded history occurred during the last 15 years — and the IPCC report says it's only going to get more intense.

Fourth, although global warming and climate disruption are the best-known consequences of carbon pollution, they're not the only ones people should worry about. The oceans absorb carbon from the atmosphere, and as they do, they become more acidic. This acidification is already killing coral reefs around the world. Ultimately, it could disrupt the entire marine food chain. Ours is a water planet. Do we really want to risk killing our oceans?

OK, enough with the scary stuff. The fifth thing you need to know is the single most important takeaway from the AR5: It's not too late. Society still has time to do something about climate disruption. The best estimate from the best science is that people can limit warming from human-caused carbon pollution to less than 3.6 degrees Fahrenheit (2 degrees Celsius) — if society acts now.

Bottom line: Our house is on fire. Rather than argue about how fast it's burning, the people of this planet need to start throwing buckets of water. We're going to need a lot of buckets. We'll also need to be smart about how we use them.

Our top priority must be to reduce our dependence on dirty fossil fuels like coal, oil, and gas, while boosting clean energy such as wind- and solar-power. The proposed carbon-pollution standards for new power plants that the Obama administration recently announced take aim at our single biggest source of carbon pollution: coal . If you care about climate disruption, the most important thing you can do right now is voice your support for these protections, and get ready for an even more important fight next year to clean up pollution at power plants already in operation.

But President Obama also has some other big tools at his disposal: Rejecting the Keystone XL pipeline, ending destructive oil and gas drilling in the Arctic and on public lands, stopping mountaintop-removal mining, curbing fossil fuel exports, and closing loopholes that exempt drilling and fracking for oil and gas from fundamental environmental protections.

You can bet that the Sierra Club and our millions of members and supporters will work hard to see that he uses those tools. Just as important, we'll also work to help develop the clean-energy solutions that will take the place of those dirty fuels. Every wind turbine, every solar panel, and every energy-efficient building is another step toward a clean-energy future.

The best climate scientists on the planet have sounded the alarm. Let's get to work.

This Op-Ed was adapted from "Five Things You Need to Know About the Big New Climate Report" whichappeared on Brune's blog Coming Clean. The views expressed are those of the author and do not necessarily reflect the views of the publisher. This version of the article was originally published on LiveScience.