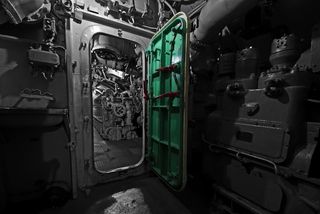 Sometimes truth may be stranger than fiction, but for best-selling author Tom Clancy, the two are often more closely paralleled.

Clancy died Tuesday (Oct. 1) at the age of 66, but his thrilling, espionage and military-inspired novels helped him become one of the most well-known American authors.

From a dramatic Soviet-era defection to a high-profile assassination plot, here are four true stories from Clancy's novels.

The Hunt for Red October

Clancy's first novel, "The Hunt for Red October," was published in 1984. The book introduced Clancy's most famous fictional character, Jack Ryan, who would become a central figure in the majority of the author's novels. In the action-packed novel, CIA analyst Ryan helps a Soviet submarine captain and his crew defect to the United States. The action takes place aboard an experimental nuclear submarine, called Red October.

The novel was reportedly inspired by a real-life mutiny aboard a Soviet Navy anti-submarine ship, called the Storozhevoy, in November 1975. The ship's political commissar, Captain of the Third Rank Valery Sablin, staged the mutiny as a protest against the corruption under Communist Party leader Leonid Brezhnev. [10 Historically Significant Political Protests]

After Soviet authorities learned of the mutiny, 13 gunboats were dispatched in pursuit of the ship. The vessel was eventually damaged, and Soviet officials arrested and interrogated the crew. Sablin, who was tried and convicted of high treason, was shot on Aug. 3, 1976.

A real-life assassination plot inspired Clancy's 2002 novel, "Red Rabbit." The fictionalized account centers around CIA analyst Ryan, as he aids in the defection of a Soviet officer who has information about a plan to assassinate Pope John Paul II.

In 1981, a Turkish assassin named Mehmet Ali Ağca shot and wounded then-Pope John Paul II. In his later testimony, Ağca said the plot was led by Zilo Vassilev, a Bulgarian military attaché based in Italy, but other accounts have also pointed fingers at a Turkish neo-fascist organization called the Grey Wolves.

On May 13, 1981, Ağca and an accomplice waited in St. Peter's Square for the pope to arrive. When Pope John Paul II passed by, Ağca fired several shots. The pope survived, but was hit by four bullets: two in his lower intestine, and the others in his left hand and right arm. Two bystanders were also hit by stray bullets.

In Clancy's 1994 novel "Debt of Honor," the author's recurring character, Ryan, has become the National Security Advisor. In the novel, the Japanese government, in the midst of an economic crisis, declares war on the United States. At one point, a grieving Japanese pilot, deeply embittered by the deaths of his son and brother in the conflict, flies his Boeing 747 into the U.S. Capitol.

The novel was published seven years before the terrorist attacks of September 11, 2011, but Clancy later commented on the eerie similarities between his fictional event and the real-life tragedy.

"I never got any fan mail from Osama bin Laden, and I don't really know how many books I sold in Afghanistan," Clancy told CNN about whether his novels may inspire nefarious activities. "You have to talk to the marketing people about that. But I'm not really concerned about it."

Teeth of the Tiger

In Clancy's 2003 book, "Teeth of the Tiger," hero Ryan's son becomes a consultant for a secret intelligence agency tasked with discreetly assassinating individuals who pose threats to national security. The novel controversially depicted a violent multiple homicide by an Islamic terrorist, set within a real-life shopping mall in Charlottesville, Va. While the event was fictional, it was tragically prophetic.

On Sept. 21, 2013, gunmen raided a shopping mall in Kenya, killing at least 39 people. A Somali Islamist group claimed responsibility for the deadly attack, which lasted hours before police and soldiers reached the assailants.

The attack was the single biggest attack in Kenya since an east African branch of al Qaeda bombed the U.S. embassy in Nairobi in 1998. That assault killed more than 200 people.