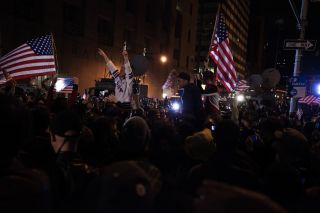 A crowd cheers and chants in excitement at the corner of Vesey St. and Liberty St. next to Ground Zero after hearing that Osama Bin Laden is dead.
(Image: © Sgt. Randall Clinton/New York City Public Affairs)

The Sunday night announcement that al-Qaida leader Osama bin Laden had been killed sent hundreds spilling into the streets in front of the White House and near ground zero in New York in what sociologists and psychologists say is a now-rare moment of American unity.

"It's one of those things that is as close to what passes for a day of national unity in the U.S. as we can get these days," said Peter Ditto, a psychologist at the University of California, Irvine who studies politics and judgment.

However, Ditto warned, the national togetherness may not last long: Already, debates are erupting online and in the media about whether flag-waving celebrations are an appropriate way to mark bin Laden's death. "You can see the edges," Ditto told LiveScience. "And it will be interesting to see how much sharper those edges get as people play the rhetorical game."

In a late-night press conference, President Barack Obama announced that bin Laden had been killed by American forces during a raid on the al-Qaida leader's compound in Pakistan -- though the news had already leaked out on Twitter and mainstream news websites. [Bin Laden's Death Spawns Conspiracy Theories]

Almost immediately, Americans took to the streets. Media outlets reported that hundreds of mostly college-age revelers crowded the street in front of the White House. In New York, the former site of the World Trade Center became a flashpoint for celebration.

New York City resident Eddie Zatorski, 53, took to the streets last night with an American flag attached to a Swiffer mop and headed to ground zero after the news broke. "This is a big night for everyone in America," Zatorski, who lost friends in the 9/11 attack, told TechNewsDaily, a sister site to LiveScience. "This brings us all together -- we have needed this moment for years."

At times, the scene seemed like that of a sporting event, with people climbing lamp posts and singing "Na Na Hey Hey (Kiss Him Goodbye)," a song more associated with losing basketball teams than the war on terror. That's not a surprising dynamic, according to Francesco Duina, a sociologist at Bates College in Maine and author of "Winning: Reflections on an American Obsession" (Princeton University Press, 2011). American culture is particularly competitive, Duina said.

"The percentage of Americans who embrace competition is higher than the percentage in any other industrialized country in the world," Duina told LiveScience.

To revelers, bin Laden's death is "a confirmation that our understanding of the world and our approach to life is superior to his, because in the end we prevailed," Duina said. "That's what's being celebrated, and that's why you see the flags."

Whether they were waving flags or not, Americans seemed almost universally pleased over the news of bin Laden's demise.

Indeed, Straughn said, even political figures who normally lambast Obama were offering praise for his handling of the raid on bin Laden's compound.

"This the moment, and maybe the first moment since he was inaugurated, when he was most clearly a unifying figure," Straughn told LiveScience.

But partisanship has a strong pull, Ditto said. In a partisan environment that associates Republicans with hawkishness and Democrats with doves, Obama's command to kill bin Laden muddies the political waters, Ditto said. Along with University of Virginia psychologist Jonathan Haidt, Ditto has found that liberals and conservatives tend to rely on a different moral calculus when making decisions about right and wrong. In particular, conservatives put more emphasis on in-group loyalty relationships, meaning that they are quicker to feel patriotic pride. Liberals, on the other hand, are relatively more worried about harm and kindness.

Everyone considers in-group relationships to some extent, Ditto said, so liberals are not immune to feeling joy at the death of the man responsible for the Sept. 11 attacks. But there is some tension to that happiness. The tension seems to be centered not in whether it was right to kill bin Laden, but whether it is right to celebrate in the streets.

"Liberals are hung up on harm," Ditto said. "It's almost the same war dynamic where you just don't want to celebrate killing somebody."

Political differences and moral values could be one reason some people see climbing a tree and chanting "U.S.A, U.S.A" to be an acceptable way to mark bin Laden's death. Generational differences are another. Around ground zero, the crowd was a mix of ages, ranging from late teens to people in their 50s and older. Around the White House, where one reveler wore an American flag bodysuit, the crowd skewed college-age. In part, that's likely because college students keep late hours and don't have to be at work in the morning, Straughn said.

But young people also experienced 9/11 differently than those in older age cohorts, said Andrew Perrin, a sociologist at the University of North Carolina, Chapel Hill, who has studied the cultural aftereffects of 9/11.

"If you were 8 or 9 at the time, by the time you began thinking about world politics, 9/11 was a thoroughly interpreted, thoroughly understood, if you will, cultural event," Perrin told LiveScience. "So you didn't go through the same level of experiencing this unsettled time and doing the work of interpreting it. You experienced it as something that was thoroughly understood before it was presented to you."

"Anything that happens between when you're 10 and 25, there haven't been many things that have happened in your life yet," Straughn said. "So 9/11 was a big one for that generation."

In the same way, the death of bin Laden is a "major climactic moment" in the adult lives of the young revelers, Straughn said.

"This is a major event in the story that has been the foreign policy event for most of their lives," Straughn said. "So I think that probably does touch young people."