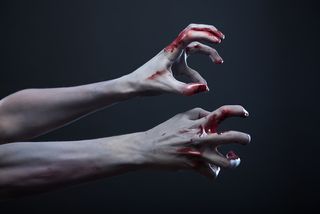 The hands of the walking dead.
(Image: © Elisanth, Shutterstock)

Zombies, it turns out, can bring some life to online education.

One educator is using the premise of AMC's "The Walking Dead," where zombie hordes stalk the landscape of a postapocalyptic United States, to teach an online course on disease-spread dynamics.

Though the show's landscape is futuristic, the spread of zombies works just as it does with any other communicable disease, said Sarah Eichhorn, the course instructor and a mathematician at the University of California, Irvine.

As part of the course — which will be taught through Instructure, an education technology company — students will model how zombie hordes grow and see how such factors as vaccines, zombie kill rates and population alter the threat. The goal is to use the undead to teach students about real-life diseases. [Zombie Facts: Real and Imagined (Infographic)]

Of course, there are a few differences between zombies and the measles.

"In normal diseases, we don't try to kill the people who are sick," Eichhorn told LiveScience.

Becoming a zombie is harder than catching the flu, because healthy people must be within biting distance of a zombie to become infected, whereas healthy people can catch a bug like the flu from particles transmitted through the air

But the only way to stop the undead is to kill them, which usually requires getting up close to the creatures.

Unlike humans, zombies don't seem to die of natural causes, at least on "The Walking Dead."

That slightly changes the picture, because how the disease spreads varies with both the number of sick people and the number of healthy people who can kill the zombies, Eichhorn said.

The bad news is that the humans on "The Walking Dead" are probably doomed.

The math of zombie infection suggests the undead win most of the time, according to recent research by Robert J. Smith?, a mathematics professor at the University of Ottawa (who writes his name with a question mark at the end), and his students.

Based on the scenes in the show depicting huge zombie hordes, complete doom is even more likely, Eichhorn said.

Yet the humans aren't out of options. Humans could still survive by creating a vaccine, though the show makes such a zombie immunization seem like a long shot.

"The world is kind of wiped out on the show, and they don't have a lot of scientists who are studying the disease," Eichhorn said.

Coming up with a cure could also give humans a way to prevail.

The other way out involves sex: If humans can somehow outbreed the zombies, then humanity could gain the upper hand. That requires an "insanely high birth rate," Eichhorn said. In her models, she found that women would have to deliver triplets with each birth in order to outcompete the zombies. And who has time for making babies when you're busy killing zombies?

Perhaps the impact would be localized, as the show centers on a small region of Georgia. Other parts of the world might be affected less, in which case the zombies could still be beaten.

Even if the numbers are not in humans' favor, the creators of the show have liberties that real pandemic workers don't: They can simply manufacture a happy ending.