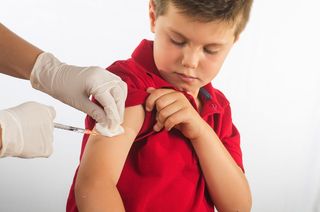 The 2010 whooping cough outbreak in California may have been fueled, at least in part, by clusters of parents who refused to vaccinate their children, a new study suggests.

Researchers analyzed local rates of children entering kindergarten with "non-medical" vaccine exemptions, meaning parents or guardians applied for an exemption from school policies requiring vaccines due to personal beliefs, rather than for medical reasons. They compared these rates with rates of whooping cough in 2010, the year the state experienced a whooping cough outbreak that caused 9,120 cases and 10 deaths from the disease.

More cases of pertussis occurred within the exemption clusters than outside of the clusters, the study found. [7 Devastating Infectious Diseases]

The results held even after the researchers took into account factors that could affect disease rates, such as population density.

Many factors likely contributed to the 2010 California pertussis outbreak, including increased detection of cases, the fact that pertussis activity increases and decreases in cycles, and that protection offered by a new version of the pertussis vaccine wanes more quickly than that of the previous vaccine.

But the new findings suggest that vaccine refusal played a role as well, the researchers said. Although the overall rate of vaccination in California remained high (90 percent of kindergartners in 2010 were fully vaccinated), some regions had lower immunization rates, the researchers said. In 2010, some schools reported non-medical exemption rates as high as 84 percent.

"Our ﬁndings suggest that communities with large numbers of intentionally unvaccinated or undervaccinated persons can lead to pertussis outbreaks," the researchers wrote in the Sept. 30 issue of the journal Pediatrics.

"In the presence of limited vaccine effectiveness and waning immunity, sustained community level transmission can occur, putting those who are most susceptible to communicable diseases, such as young infants, at increased risk," said the researchers, from Johns Hopkins Bloomberg School of Public Health, Emory University School of Public Health and the California Department of Public Health.

The researchers noted that non-medical exemptions for kindergartners are only a proxy for community level vaccination coverage. Future research should study how vaccine refusal contributes to pertussis outbreaks, the researchers said.

Another study published earlier this month found that young children who miss some of their whooping cough shots, or receive the shots late, are at increased risk for catching the disease.