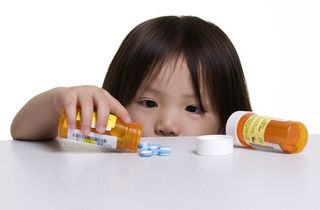 Despite growing concerns in recent years over the percentage of children receiving medications for mental health problems, a new study finds that the rate of prescriptions in very young children seems to have stabilized late in the decade of the 2000s, after its peak in 2004.

"It's heartening to realize that we are not just going up with medication use every year," said study researcher Dr. Tanya Froehlich, professor of pediatrics at the University of Cincinnati in Ohio.

In the study, which included more than 43,000 U.S. children ages 2 to 5, researchers looked at how many children were diagnosed with disorders including attention-deficit/hyperactivity disorder (ADHD), as well as anxiety and mood disorders, and how many received medication, in four-year periods between 1994 and 2009.

They found that although there was an increase in the rate of diagnosis of psychiatric disorders in these children over the study period, medication use diminished. During the 2006-2009 period, among children who were diagnosed with a disorder, 29 percent were given medication, down from 43 percent in the 1994–1997 period.

Among all children who visited a doctor during the 2006-2009 period, 1 percent received psychiatric medication, down from 1.45 percent during the peak period of 2002-2005, according to the study published today (Sept. 30) in the journal Pediatrics. [Top 10 Controversial Psychiatric Disorders]

The study looked at medications that are used to treat psychiatric disorders including antidepressants, ADHD drugs, anti-anxiety medications and mood stabilizers. Previous studies have shown that prescriptions of such medication for preschool children increased two- to three-fold between 1991 and 2001, although only a few drugs are approved for use in very young children by the Food and Drug Administration (FDA), and their long-term effects on children's developing brains are not fully known, the researchers said.

It is possible that the trend stabilized partly because the FDA started to issue black box warnings on psychotropic medications in the mid- to late-2000s, highlighting their potential health risks to children, the researchers said. Antidepressants may increase the risk of suicide, and ADHD drugs have been linked with heart problems.

"I think those warnings gave doctors pause," Froehlich told LiveScience. "It seems like from mid- to late-2000s, we started exercising more caution."

It is also possible that growing awareness about the high prescription rate led to doctors considering alternatives, such as counseling and behavioral therapy, before prescribing medications to very young children, she said.

Over the study period, ADHD was the most commonly diagnosed mental health disorder, at a rate of 0.78 percent of very young children who visited a doctor. The stimulants commonly used to treat ADHD were the most commonly prescribed psychiatric medications.

The researchers called on doctors of very young children who are diagnosing ADHD and prescribing stimulants to use the most up-to-date and stringent diagnostic criteria and clinical practice guidelines.

The study also found that boys, white children, and children from families of lower household income were more likely than children from other groups to receive prescriptions. Future studies are required to determine whether these prescriptions are appropriate, the researchers said.