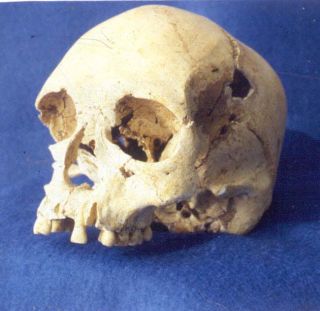 For decades it has been believed that the first peoples to populate North and South America crossed over from Siberia by way of the Bering Strait on a land-ice bridge.

However, a new study examining the largest collection of South American skulls ever assembled suggests that a different population may have crossed the bridge to the New World 3,000 years before those Siberians.

Scientists occasionally discover skulls in South America that look more like those belonging to indigenous Australians and Melanesians than Northern Asians, but researchers tend to regard these skulls as anomalies due to natural variation rather than a norm, mainly because there were too few to study.

Now scientists have compared 81 skulls from the Lagoa Santa region of Brazil to worldwide data on human variation.

While the skulls of Native Americans and Northern Asians--the descendents of the early Siberian settlers--generally feature short, wide crania, a broader face, and high, narrow eye sockets and noses, this collection was remarkably different.

This indicates that these skulls--which date to 7,500 to 11,000 years ago--were not merely anomalies but rather were the majority, supporting the hypothesis that two distinct populations colonized the Americas.

People with skulls resembling Paleo-Indians were present in Asia around 20,000 years ago, and lacking the technology to cross the Pacific Ocean by boat, they probably crossed the land bridge to Alaska several thousand years before the Siberians, said study co-author Mark Hubbe of the Universidade de S?o Paulo.

"We don't know for sure, but we believe at least 3,000 years earlier," Hubbe told LiveScience. "We have a difference of 3,000 years in South America, and we can assume the difference is the same in North America."

The research will be detailed in the Dec. 20 issue of the journal Proceedings of the National Academy of Sciences.