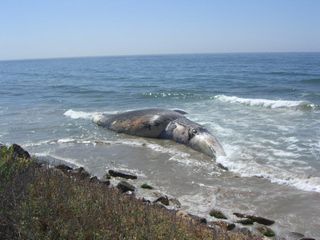 The male blue whale whose earwax was used in the study was found on the coast of California in 2007.
(Image: © Michelle Berman-Kowalewskic, Ph.D., Santa Barbara Museum of Natural History, Santa Barbara, Calif.)

A blue whale's buildup of earwax archives its history of stress levels and exposure to chemical pollutants, which could allow researchers to piece together new details about the animal's life, a study shows.

The blue whale is the largest animal on Earth, and an endangered species. Like many other baleen whales, these massive creatures tend to accumulate layers of wax in their ear canals, which over time results in long earplugs.

"Scientists in the past have used this waxy matrix as an aging tool, similar to counting tree rings," study researcher Sascha Usenko, an assistant professor of environmental science at Baylor University, explained in a statement. The earplug, however, had never been used to obtain a chemical profile. [Images: Sharks & Whales from Above]

Finding a lifetime chemical proﬁle for an animal can be tricky, especially for free-ranging creatures. Scientists previously have used whale blubber to determine the animal's stress hormone levels and chemical exposure, but that method provides a peek at only a limited period of the whale's life history.

In the new study, Usenko and colleagues studied a 10-inch-long (25 centimeters) earplug that was pulled from the carcass of a 70-foot-long (21 meters) male blue whale in 2007 near Santa Barbara, Calif. The whale was around 12 years old and had died after being hit by a ship.

In the earwax archive, the researchers found traces of 16 pollutants, including pesticides and flame retardants, which were most prevalent from the whale's birth until it was 6 months old. This suggests that the pollutants were transferred to the whale from its mom while the baby was developing in the womb and nursing after it was born, the researchers say.

The earwax also showed the whale's level of the stress hormone cortisol generally increased over time, which could be explained by a number of possibly stressful experiences, including weaning, migration, changes in social status and environmental noise.

The cortisol level shot up most significantly around the time the whale's testosterone levels peaked and it reached sexual maturity (between 9.5 and 10.5 years old). That timing might indicate the whale was stressed out by competition for a mate or the social bonds it was forming during sexual maturity, the researchers say.

Usenko and colleagues hope they can use this novel earplug method to answer questions about the human impact on whales.

What's more, they say this approach can be used to analyze earwax plugs that are sitting in museums, some of which might date back to the 1950s. With further study samples, researchers might be able to put together a more extensive picture of how increasing pollution, sonar use and the introduction of specific pesticides have affected whales, Usenko said.

The research was detailed in the Proceedings of the National Academy of Sciences.