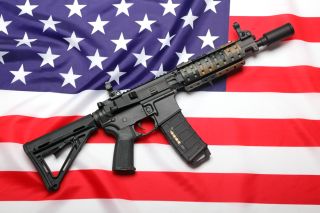 The AR-15 semiautomatic rifle has been called "America's gun," but it also has a dark history.
(Image: © Vartanov Anatoly | Shutterstock.com)

It's been called "America's Gun." The semi-automatic weapon known as the AR-15 — sometimes referred to by its many fans as "the Black Rifle" — is by some estimates the most popular rifle in the United States, with an estimated 4 million in circulation. And it's back in the news once again.

Law enforcement officials initially claimed that Aaron Alexis used an AR-15 to kill 12 people and injure eight before he was killed in Monday's mass shooting at the Washington Navy Yard in the nation's capital. However, officials later confirmed that Alexis used a shotgun (and possibly a handgun) and was not in possession of an AR-15 during Monday's shooting, though he is believed to have rented and practiced with an AR-15 at a Virginia gun range less than two days earlier.

In June, John Zawahri used an AR-15 to kill five people in Santa Monica, Calif. A Portland, Ore., mall filled with holiday shoppers was the scene of a mass shooting in December 2012, when Jacob Tyler Roberts killed two people with a stolen AR-15. Three days later, Adam Lanza killed 26 people — including 20 schoolchildren — at Sandy Hook Elementary School in Newtown, Conn., with an AR-15. [Infographic: Gun Ownership on the Rise in US]

And James Holmes is accused of entering a movie theater in Aurora, Colo., in July 2012 and opening fire, killing 12 people and injuring 70 others. Holmes used several weapons, including a modified AR-15.

The AR-15s available today are a variant of the M16 rifles used by military forces worldwide. Originally designed by Armalite (the AR in AR-15), the rifle proved its mettle in the Vietnam War, when soldiers needed a lightweight weapon that fired small-caliber ammunition. And following the mass shootings of 2012, the market for AR-15s exploded as some gun fans feared a ban on sales of semi-automatic weapons would follow.

What is it about this particular weapon that makes it so attractive to gun collectors, shooting range enthusiasts and mass murderers? Part of the rifle's appeal, according to experts, is its versatility — the modular AR-15 can be modified, assembled from scratch, colored, customized and rebuilt with just a few simple tools and a limited amount of technical know-how.

"Because it's so modular, you can build the firearm the way that you want it, and it can be like nobody else's firearm. It's about personalization," Jay Duncan, vice president of sales at gun retailer Daniel Defense, told Wired. Indeed, the AR-15 has several Facebook pages, including one with more than 170,000 fans, where issues like mags (magazines), barrels, lasers, scopes and other gun bling are discussed.

"I always tease that it's like Legos for grown men," Duncan said, "because there's plenty of guys that get one, two, six ARs. And they're constantly tinkering with them — changing barrel lengths, changing optics, putting different sights on them. It's the same reason that a guy gets into remote-controlled cars or fly-tying [fishing]. Because it's a fun hobby, and it's a distraction from reality sometimes."

But reality has a way of intruding into gun-fueled fantasies, and the AR-15 is now under fire as a weapon that has as many detractors as aficionados.

"Almost every mass shooting involves an AR-15 assault rifle," said Staff Sgt. Alonzo Lunsford, who was wounded by Maj. Nidal Hasan during the 2009 Fort Hood shooting in 2009, as quoted by CNN. "It's the preferred mass shooter's weapon of choice. But I don't see a logical reason why any civilian needs to have one of these killing machines."

"This is one more event to add to the litany of massacres that occur when a deranged person or grievance killer is able to obtain multiple weapons — including a military-style assault rifle — and kill many people in a short amount of time," Sen. Dianne Feinstein (D-Calif.), an outspoken advocate of gun-control legislation, said in a Sept. 16 statement. "When will enough be enough?"

Will a ban work?

But even the weapon's detractors acknowledge that rifles like the AR-15 are tough to regulate for the same reason that make them so popular — the ease with which gun owners can modify the AR-15 make defining it as an "assault weapon" an elusive goal, and the precise definition can vary from one jurisdiction to another. [What Should You Do in a Mass Shooting?]

Even under the rules of the now-expired federal Assault Weapons Ban of 1994, gun owners could modify their AR-15 into a non-assault weapon by making a few simple, superficial changes. The AR-15 that Lanza used in Newtown was a legal weapon under Connecticut law.

Nonetheless, advocates of gun control are cheering the small steps that the Obama administration is making to limit the proliferation of guns in America: By some estimates, there are about 300 million guns in the United States, the equivalent of nearly one per person. In August, Obama signed executive orders staunching the import of military-surplus weapons and closing a loophole that lets people (including felons) avoid background checks by registering guns to corporations.

Correction: This article was updated at 9:15 a.m. ET to clarify the type of weapon used in the Washington Navy Yard shooting.