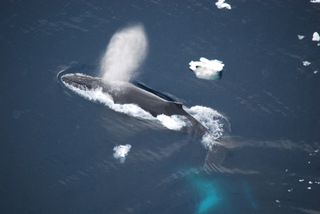 A rare photo showing a humpback whale next to sea ice or part of an iceberg in the Weddell Sea. The picture was snapped by researchers during a January 2013 expedition.
(Image: © ITAW/Carsten Rocholl)

Underwater conversations between humpbacks have revealed a surprising secret: Some of the whales in the Southern Hemisphere appear to skip their northward migration and stay in frigid Antarctic waters for the winter.

A scientist overheard the whales chatting in the month of April – the start of the Antarctic fall – while using a research station in the area that has underwater microphones. At the time, conventional wisdom said the whales should have been 4,350 miles (7,000 kilometers) away off the coast of Africa.

"I was totally surprised, because the textbook-opinion until that day was that humpback whales migrate to Antarctic waters only in the austral summer months," said Ilse Van Opzeeland, a marine biologist at the Alfred Wegener Institute, Helmholtz Centre for Polar and Marine Research in Germany, in a statement.

To see if this was a one-time excursion, Van Opzeeland developed a program to analyze all recordings made by the PerenniAL Acoustic Observatory in the Antarctic Ocean (PALAOA), located near the Weddell Sea, in 2008 and 2009. Humpback calls popped out in the winter months of both years. [Video: Humpback Whales Sing Their Tunes]

"Today, we know that, in 2008, the humpback whales were present near the observatory with the exception of the months May, September and October," she added. "In the following year, they were absent only in September. Therefore, it is highly likely that humpback whales spent the entire winter in the eastern Weddell Sea during both years."

Humpback whales, which are about the size of a bus, are generally believed to migrate from the poles in the summertime to the equator in the winter, where they breed.

It's possible that young humpback females not pregnant with calves may stay behind in Antarctica to avoid the energy-draining commute to Africa. There would be enough krill near Antarctica to fatten up for future years, Van Opzeeland said. Later in their lives, after giving birth and suckling a calf, each female will lose up to 65 percent of her body weight.

There are several sets of humpback populations, and nobody is sure which group the Weddell Sea singers belong to. The scientists plan to compare the PALAOA recordings with songs recorded near Gabon and Mozambique in Africa. The cries and howls of humpbacks are unique to each group, providing an "acoustic fingerprint" that could give clues as to where the Antarctic whales breed, Van Opzeeland said.

Another open question is why the whales were only heard for part of the winter. Scientists think humpbacks may hang out in "polynyas," which are open areas in the ice that form when offshore winds push sea ice away from the Antarctic continent.

"When polynyas close or change position, the whales may move with them and leave the recording radius of 100 kilometers, which our underwater microphones are monitoring. However, we do not yet have proof for this behavior," Van Opzeeland said.

The research was published in the Sept. 6 issue of the journal PLOS ONE.