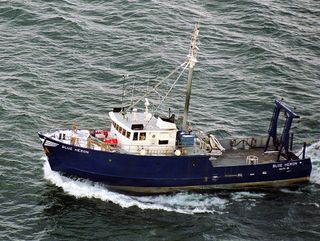 Researchers spent one week aboard a scientific vessel in Lake Michigan, tracking a plume of fluorescent dye to better understand how currents transport marine organisms and contaminants such as spilled oil.

The five-member team from Purdue University conducted the research in July, aboard the National Science Foundation-supported research vessel Blue Heron. They worked in the middle of Lake Michigan — about 50 miles southeast of Milwaukee.

The Great Lakes lack the predictable regularity of tides; a combination of factors including winds, temperature and current depth influence currents. Combined, these factors cause a complex, spiraling water flow, producing a type of interior (rather than surface) waves called inertial waves.

The researchers hypothesize that the inertial waves are the primary mechanism governing the movement and dispersion of particles. "You can get currents as strong as a half-meter per second in the middle of Lake Michigan," Cary Troy of Purdue's School of Civil Engineering said prior to the study. "The effect is strongest in the middle of each of the Great Lakes, so that's why we are doing the research there."

"The goal is to do dye-release experiments and to track the dye patch over time to see where it diffuses and where it moves and to relate that to the information we have about the lake currents and waves," Troy said. "One obvious application is for something like an oil spill or any sort of contaminant spill in the Great Lakes. If you have a spill, you need to predict where it's going to go and how quickly it's going to dissipate."

Findings also could shed light on movement of organisms such as plankton and fish larvae. "Data will be used to improve computer models of how these things are circulated and transported in the Great Lakes," said Troy, who worked onboard with doctoral student Jun Choi, undergraduate David Cannon and two other students.

Research findings could apply to any of the Great Lakes and other large bodies of water.

The non-toxic dye, called Rhodamine WT, is initially bright pink and later turns blood red. The researchers tracked the movements of this dye using a fluorescence detector called a fluorometer. The Blue Heron towed the equipment and controlled it so that it undulated up and down, a technique called Tow-Yo. The up-and-down movement enabled researchers to create a 2D scan. Then, they tow-yoed in a grid pattern, providing a 3D view of the dye plume.

In addition to the fluorometer, the researchers used devices called drifters to track the dye. The buoylike drifters flow with currents, using underwater sails. They are equipped with global positioning systems and beam their locations to a satellite every 30 seconds.