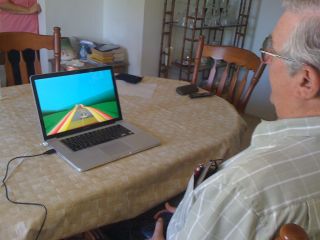 The findings suggest that cognitive declines may not be the inevitable spoils of aging, according to the study published today (Sept. 4) in the journal Nature.

"We know that these fluid cognitive processes decline with age, but there's a growing belief that they don't necessarily have to — that our brains can be kept strong, and preserved in terms of our cognitive abilities through appropriate challenge," said study co-author Dr. Adam Gazzaley, a neuroscientist at the University of California San Francisco.

Studies of brain games have found that most improve people's performance on the games themselves — after all, if people practice any task, they usually get better at it.

However, a 2010 study in Nature suggested that such gains don't translate to other cognitive functions. Still, that study didn't look at older adults, who typically show a dramatic decrease over time in their cognitive control, which enables people to sift out irrelevant information and focus on a task at hand. [Inside the Brain: A Journey Through Time]

To see if brain training could work for older adults, Gazzaley and his colleagues developed a video game called "Neuroracer." In order to play the game well, players have to drive a car while ignoring irrelevant signs, and press a button only when a target sign showed up. The better people become at the game, the more challenging the game becomes.

The study included 46 participants, ages 60 to 85. The researchers gave them standard cognitive tests aimed at measuring their multitasking abilities before and after they played the game. They played for a total of 12 hours, over four weeks.

Prior to playing the game, the older adults showed marked deficits in their ability to multitask, compared with 20-year-olds.

One month and six months after the training, the older cohort showed dramatic improvements in their ability to multitask — some of them even outperformed 20-year-olds (who had never played the game). People who played just the driving or just the signs portion of the game showed no such improvement.

The findings suggest that far from being inevitable, the mental declines in older adults could even be reversible, Gazzaley said.

Though it's not clear why the games may have improved multitasking abilities, it's possible that the key is the game's ever-increasing challenge, he said. In real life, once people learn a skill such as driving, they don't typically seek out ways to make it more and more difficult.

That constant challenge may be the workout the brain needs, Gazzaley said.

"The reality is in the world, when you get better at something, it just gets easier," Gazzaley told LiveScience. "In this game, in the opposite is true. As you get better, it gets hard."