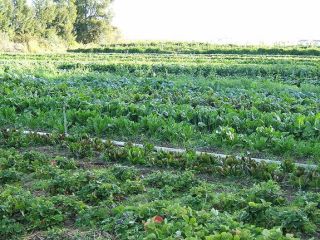 Judith Rodin is president of the Rockefeller Foundation. This Op-Ed is adapted from an article for the Skoll World Forum, which was published in partnership with Forbes. Rodin contributed this article to LiveScience's Expert Voices: Op-Ed & Insights.

In a speech to members of the Zimbabwean farming community in 1994, the then-president of South Africa, Nelson Mandela, remarked: "There are few better ways to show one's love for one's country and the well-being of one's nation than by working on the soil."

Indeed, agriculture has been a critical driver of well-being for centuries, ensuring the food security central to human health and catalyzing the productivity needed for economic prosperity. As such, agriculture has been a critical part of The Rockefeller Foundation's mission to "promote the well-being" of humanity over the course of our first 100 years — from the economic development of the southern United States in the early 20th century to the seeds that sparked the Green Revolution and fed a billion people throughout Latin America and Asia.

Africa is poised for the world's next green revolution. Across the continent, there has been a renewed commitment from governments, nongovernmental organizations and the private sector to move agriculture from a development challenge to a business opportunity. As a result, countries such as Nigeria are moving to once again become net exporters, rather than importers, of agricultural commodities. Agriculture has become one of the most powerful engines for Africa's economies, many of which have experienced rapid growth over the last decade.

Despite those developments, many smallholder farmers — the more independent farmers who form the backbone of Africa's agriculture sector — remain trapped in poverty without access to financing and other tools to increase their productivity and profitability. In 2006, The Rockefeller Foundation partnered with our colleagues at the Gates Foundation to launch the Alliance for a Green Revolution in Africa (AGRA), with the aim of ensuring that millions more smallholders have access to the better seeds, healthy soils, profitable markets, storage and transport, and supporting policies needed to transform agriculture and drive sustainable economic growth.

But in order to scale up innovation and invest in farmers on a large scale, more must be done to break down the remaining barriers. To do so, the agricultural and financial sectors must form new linkages and better align their visions, bridging individuals with financing to those individuals who can implement innovative approaches — such as boosting agricultural production; enhancing supply inputs like seeds, fertilizer and water; and improving outputs, including storage, processing and distribution facilities, and access to markets.

To help connect these sectors, The Rockefeller Foundation hosted a summit in July in Abuja, Nigeria, entitled "Realizing the Potential of Africa's Agriculture: Catalytic Innovations for Growth.'' The summit — one of our centennial convenings focused on forward-looking solutions to challenges that will define our second century of strategic philanthropy — brought together agriculture and finance ministers, along with other leaders, from more than 23 African nations. It was an unprecedented conversation to identify concrete ways to strengthen African agricultural markets and value chains to benefit smallholder farmers.

Over the course of the summit, participants identified a number of innovative solutions and financing models that can encourage increased lending to farmers. One such model, known as credit guarantees, was pioneered by The Rockefeller Foundation and has been taken to scale by AGRA with promising results.

For example, the Nigeria Incentive-Based Risk-Sharing System for Agricultural Lending (NIRSAL) offers strong incentives and technical assistance to banks, building lenders' confidence and understanding of agriculture. The goal is to increase the percentage of banks lending to farmers and agricultural enterprises from 1.4 percent to 7 percent within the next 10 years. NIRSAL has already helped unlock additional investment: Earlier this year, the U.S. Agency for International Development (USAID) and the Nigerian government each provided guarantees to increase private financing and leverage up to a commercial-lending level of $100 million.

These innovative finance models will go a long way toward replicating many of the agricultural innovations already happening across the continent. The Dutch Agricultural Development and Trading Company, for example, developed a technology that brings a mobile cassava processing plant to villages, enabling farmers in Mozambique to process their roots into cassava cakes that can be stored for up to two years. This opens new markets that were once limited because of root spoilage during transportation.

In another example, The Rockefeller Foundation-supported Horn of Africa Risk Transfer for Adaptation project, an integrated risk management scheme developed by the Relief Society of Tigray and Oxfam America, helps Ethiopian farmers strengthen their food security and income security through a combination of improved resource management, crop insurance, microcredit and savings. The poorest farmers are eligible to pay for insurance with their labor through resilience-building projects in their communities.

In addition to financing, catalytic innovations for growth are also emerging, including mobile-phone technology for better sharing and disseminating information; the structuring of agricultural jobs as rural, entrepreneurial enterprises to attract younger workers; and by addressing gender inequities that hurt the incomes of women farmers.

With greater collaboration between finance and agriculture to find, scale and invest in catalytic innovations for growth, Africa will be closer not only to realizing its agricultural potential, but also be closer to achieving its economic promise — for the well-being of African farmers, for the strength of their nations and for the prosperity of the entire continent.

This Op-Ed is adapted from "Bridging Finance and Innovation to Advance a Green Revolution in Africa" on the Skoll World Forum on Social Entrepreneurship, a premier international platform for accelerating entrepreneurial approaches and innovative solutions to the world's most pressing social issues.The views expressed are those of the author and do not necessarily reflect the views of the publisher. This version of the article was originally published on LiveScience.