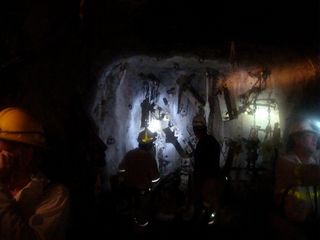 Tom Valtin is a managing editor at the Sierra Club. This article was adapted from a post that originally appeared on the Sierra Club blog Compass. Valtin contributed this article to LiveScience's Expert Voices: Op-Ed & Insights.

In Cheyenne, Wyo., last week, the U.S. Bureau of Land Management (BLM) held a lease sale in for mining rights to a tract in the state's Powder River Basin — 149 million tons of publicly-owned coal. The sale failed to attract a single bid.

It was the first time that a federal coal tract offered for sale in Wyoming failed to attract any bidders — even the company that originally sought to mine the location determined that it couldn't do so profitably. In June, the U.S. Department of the Interior's Inspector General released a report identifying numerous flaws in BLM's coal-leasing program. Among them, the report confirmed that over the last 20 years, 80 percent of lease sales in the Powder River Basin of Wyoming attracted only one bidder, and none attracted more than two.

Domestic coal use is waning for a variety of reasons, including its negative impact on public health due to toxic emissions, its contribution to climate disruption, the manner in which strip mining destroys landscapes and habitat, the way coal waste poisons America's waters and coal's steadily dwindling economic viability.

Due to poor market conditions, 151 coal mines were idled in the first half of 2013, according to an SNL Energy analysis of U.S. Mine Safety and Health Administration data. With the price of coal mired in a four-year slump with no end in sight, it increasingly makes no economic sense for coal companies to extract the resource and bring it to market. At the same time, Americans are demanding action on coal pollution, and clean energy is cheaper in most places in this country.

Cloud Peak Energy said it had evaluated the coal tract in the Powder River Basin and decided not to bid due to "current market conditions and the uncertain political and regulatory environment of coal and coal-fired electricity." The Powder River Basin, which straddles the Wyoming-Montana border, is the largest coal-mining region in the United States. But with the domestic coal market in steep decline, the economics of extracting its coal are increasingly bleak.

Cloud Peak Energy CEO Colin Marshall said that an economic analysis led the company to conclude that "a significant portion" of the coal up for bid was not economically recoverable. "We are unable to construct an economic bid for this tract at this time," he said. "We will continue to evaluate any possible future lease sales by the BLM of these tons in the North tract as market conditions improve." But the assumption that market conditions for coal will improve is clearly questionable if not downright delusional. The failure of the lease sale to attract any bidders shows that the federal coal lease program is mired in outdated and inaccurate beliefs about coal's market value. "It comes down to economics, plain and simple," said Aaron Isherwood, a managing attorney with the Sierra Club's Environmental Law Program. "The market for coal is incredibly soft, so why would the government sell publicly-owned coal at a time when people are paying rock-bottom prices for it? Federally-owned coal is supposed to be sold at fair market value. Would you try to sell your house right after the housing market craters? The public is getting ripped off. The failure of this lease to attract a single bid is clear evidence that the federal coal-leasing system is badly in need of reform." Nearly 5 billion tons of federal coal is currently being leased or sold in the Powder River Basin, even as the domestic market for the resource is tanking. As confirmed by the Department of Interior report, the way leases are managed by the BLM is short-changing American taxpayers to the tune of millions of dollars with each successive lease. Coal market experts who spoke in Wyoming and Montana earlier this week called for a moratorium on new federal coal leases until the Department of Interior and Bureau of Land Management "get their act together," asserting that the federal leasing program has shortchanged taxpayers by $30 billion over the past three decades. "The BLM can't give this stuff away," said Bruce Nilles, senior director of the Sierra Club's Beyond Coal campaign, in reaction to the failure of the Maysdorf II coal tract to attract any bidders. "This is the beginning of the end of coal — it's officially worthless. This is what happens when community after community replaces their aging coal plants with clean energy. "

This article was adapted from the post Wyoming Coal Lease Sale Attracts Zero Bidders on the Sierra Club blog Compass The views expressed are those of the author and do not necessarily reflect the views of the publisher. This version of the article was originally published on LiveScience.