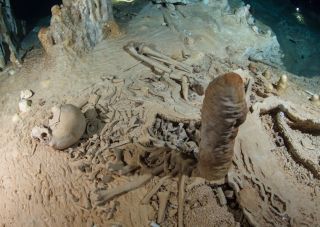 First, the bad news: Divers stole a prehistoric human skeleton from an underwater cavern near Tulúm on Mexico's Yucatán Peninsula five years ago. Police have yet to solve the case. But the good news? The looters didn't take everything. Some bits of bone were preserved under stalagmites, mineral growths shaped like upside-down icicles on the cave floor.

By analyzing what's left of this ice age grave site, researchers determined that the skeleton could be up to 13,000 years old, making it "one of the oldest human skeletons from America," study author Wolfgang Stinnesbeck, an earth scientist at Heidelberg University in Germany, said in a statement.

Stinnesbeck and his colleagues first became aware of the skeleton in a submerged cave called Chan Hol in February 2012 from photos on social media. Unfortunately, 90 percent of the skeleton was looted a month later. [The 25 Most Mysterious Archaeological Finds on Earth]

The researchers used pre-robbery photos to reconstruct the skeleton, determining that the person had likely been male, and that he likely died in the cave at a time in the ancient past when the site was dry. The researchers also collected the bone fragments remaining in the cave, including part of a hip bone that was stuck under a stalagmite.

Often, to determine the age of human remains, scientists look at bone collagen and measure a radioactive isotope of carbon that decreases at a regular rate once a living thing dies. In this case, carbon dating wasn't possible, however; the collagen in the skeleton had completely degraded after years of exposure to tropical water, the researchers said.

As an alternative, the researchers looked at the relative levels of uranium and thorium isotopes in the stalagmite growing on top of the bone. Those results showed a minimum age of 11,300 years. But Stinnesbeck and his colleagues speculated that the skeleton could be even older, based on another sediment deposit located between the bone and the stalagmite. The researchers estimated that the remains could be as old as 13,000 years.

Jim Chatters, an archaeologist with Applied Paleoscience in Bothell, Washington, who was not involved in the study, said he wasn't convinced by this extrapolation, adding that deposits under the stalagmite could have formed more rapidly.

"I could buy that skeleton being over 11,000 years old," Chatters told Live Science, "but not 13,000, at least not with the evidence presented."

Even at 11,000 years old, the bones would still join a special class of human skeletons from the Americas. "We don't have very many individuals from that age range," Chatters said.

Prehistoric human skeletons could help scientists understand how and when the Americas were first settled — still a subject of much debate in archaeology. Stinnesbeck told Live Science that the new finding is further evidence that humans were settled in the Americas before the Clovis culture, long thought to be the first to arrive to North America via a land bridge from Asia about 13,000 years ago. The "Clovis first" hypothesis has been challenged by recent findings at sites like Monte Verde in Chile, where scientists have found traces of human occupation at least 14,800 years old, and an underwater sinkhole known as the Page-Ladson site in Florida where scientists have found 14,550-year-old stone tools.

The Yucatán Peninsula has emerged as one of the most important sites for pre-Clovis findings. Once-dry caves like Chan Hol flooded with rising water when glaciers melted at the end of the last ice age, preserving human remains as well as extinct animals like giant sloths and saber-toothed cats. "The area appears to be [a] prime site and paleontological and paleoanthropological bonanza, with so many finds from the late Pleistocene in a really small area," Stinnesbeck told Live Science in an email.

In 2007, divers found the skeleton of a teenage girl, nicknamed Naia, in Hoyo Negro, another submerged Yucatán cave; in 2014, Chatters and his colleagues determined that the teenager likely died 12,000 to 13,000 years ago, based on radiocarbon dating and uranium-thorium dating.

Chatters said it was unfortunate that the Chan Hol site was looted, and noted that archaeologically rich caves in the region are becoming more accessible to divers, which puts the sites at greater risk of being disturbed or plundered.

"Carelessness and lack of skill, even notwithstanding looting, are real threats to the integrity of these finds," Chatters said, adding that he's found bones moved or broken at Hoyo Negro since the site's discovery.

The results from the Chan Hol remains were published online Aug. 30 in the journal PLOS One.