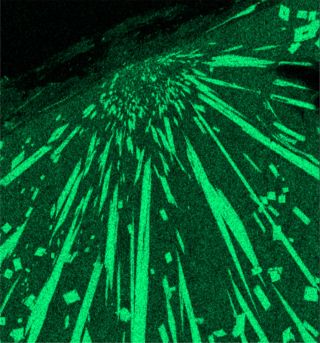 A meteor or comet impact near Quebec heaved a rain of hot melted rock along North America's Atlantic Coast about 12,900 years ago, a new study claims.

Scientists have traced the geochemical signature of the BB-sized spherules that rained down back to their source, the 1.5-billion-year-old Quebecia terrane in northeastern Canada near the Gulf of Saint Lawrence. At the time of the impact, the region was covered by a continental ice sheet, like Antarctica and Greenland are today.

"We have provided evidence for an impact on top of the ice sheet," said study co-author Mukul Sharma, a geochemist at Dartmouth College in Hanover, N.H. The results were published today (Sept. 2) in the journal Proceedings of the National Academy of Sciences.

The new research shakes up a controversial theory about a big climate shift called the Younger Dryas, when Earth abruptly swung into a glacial period 12,900 years ago. The cooling has been attributed to a sudden shutdown in Northern Atlantic Ocean currents, caused by a big glacial lake flood out the St. Lawrence or Mackenzie Rivers. But in 2007, scientists suggested that comet or meteor impacts or atmospheric fireballs triggered the Younger Dryas, though no crater of the right age has ever been found.

The tiny particles from New Jersey and Pennsylvania, analyzed by Sharma and his colleagues, have never been accurately dated, Sharma admits. They could be several thousands years older than the widespread glacial event. "We are assuming they are Younger Dryas, but [dating] is one of the things that should be done better," Sharma told LiveScience.

And geochemical tracers in the molten rock show it can't be traced back to a recently discovered impact crater near Quebec called Corossal crater, thought to be Younger Dryas-age. [When Space Attacks: The 6 Craziest Meteor Impacts]

The researchers also proved that spherules from sites in North America and Europe, thought to be evidence of Younger Dryas comet impacts, didn't come from outer space. Sharma and his colleagues measured osmium isotopes in the melted rock and their surrounding sediment. Meteorites usually carry much more osmium than Earth rocks. (Isotopes are versions of elements with different numbers of neutrons.) But none of the spherules were extraterrestrial, Sharma said.

"Clearly these things were produced in an impact fireball, but we didn't find any evidence of meteorites," Sharma told LiveScience.

Yet Sharma remains convinced that the spherules from the Northeast Atlantic sites link up to the Younger Dryas cooling. "We have for the first time narrowed down the region where a Younger Dryas impact did take place, even though we have not yet found its crater," he said.

Scientists on the other side of the impact theory debate are not so sure.

"At this point, the pro-impact literature is fringe science being promoted by a single journal," said Nicholas Pinter, a geologist at Southern Illinois University in Carbondale, who was not involved in the PNAS research.

Sharma's osmium isotope analysis of Younger Dryas sediments supports studies that show high concentrations of iridium (a meteorite impact marker) in Younger Dryas layers are erroneous, said Gregory Ravizza, a geologist at the University of Hawaii, also not involved in the research. Osmium and iridium concentrations tend to track each other — both will be high at the same spot, Ravizza said, casting doubt on Sharma's conclusions.