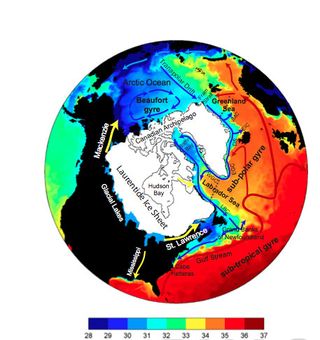 The drainage pathways of meltwater stored in glacial lakes located along the southern margin of the Laurentide Ice Sheet. The direction of meltwater drainage is shown by the yellow arrows. The approximate position of the ice sheet is shown (in white) just before the onset of the Younger Dryas. The ocean colors are surface salinity from the control integration with warm (cold) surface currents shown in red (blue).
(Image: © Alan Condron and Peter Winsor, PNAS)

A giant flood of Arctic meltwater may have triggered an ancient 1,200-year-long chill nicknamed the "Big Freeze," the last major cold age on Earth, a new study finds.

These findings suggest that changes in the flow of water in the Arctic could suddenly alter the modern climate, study investigators added.

Starting about 12,900 years ago, the Northern Hemisphere was abruptly gripped by centuries of cold, an era technically known as the Younger Dryas. Scientists have suggested this chill helped wipe out most of the large mammals in North America as well as the so-called Clovis people. The Big Freeze was not a glacial period, which are colloquially often called ice ages — it was a cold time in the relatively warm spans between glacial periods.

Although researchers have suggested a cosmic impact might have set off this Big Freeze, the prevailing theory for the cause of the Younger Dryas was a vast pulse of freshwater— a greater volume than all of North America's Great Lakes combined — that poured into the Atlantic and Arctic Oceans. The source of this flood was apparently the glacial Lake Agassiz, located along the southern margin of the Laurentide Ice Sheet, which at its maximum 21,000 years ago was 6,500 to 9,800 feet (2,000 to 3,000 meters) thick and covered much of North America, from the Arctic Ocean south to Seattle and New York.

"The flood was likely caused by the sudden breaking of an ice dam," said researcher Alan Condron, a physical oceanographer at the University of Massachusetts at Amherst. "Prior to the flood, meltwater is thought to have drained into the Gulf of Mexico, down the Mississippi River. After the dam broke, the water rapidly flowed into the ocean via a different river drainage system." [7 Ways the Earth Changes in the Blink of an Eye]

This deluge would have diluted the circulation of saltwater in the North Atlantic, disrupting the ocean "conveyer belt."that cycles warm water up to the Arctic, where it cools and sinks and travels back south along the ocean floor. With less warm seawater moving poleward, temperatures across the Northern Hemisphere apparently plunged.

The waters from Lake Agassiz were originally suggested more than two decades ago to have poured through the Great Lakes and St. Lawrence Valley. However, scientists recently suggested this meltwater may have instead flooded into the Arctic Ocean via the Mackenzie Valley about 2,500 miles (4,000 kilometers) northwest of the St. Lawrence outlet.

To see which flooded waterway might best explain the plummeting temperatures seen during the Younger Dryas, a group of scientists developed computer models that studied the impact meltwater from the two outlets had on the conveyer belt of currents known as the Atlantic Meridional Overturning Circulation.

The researchers found that meltwater flooding the St. Lawrence Valley would have weakened this current in this conveyer belt by 15 percent or less. In contrast, freshwater pouring into the Mackenzie Valley would have weakened this conveyer belt by 30 percent or more. This suggests the Mackenzie Valley was the likely route for the freezing seen during the Younger Dryas, not the more southern St. Lawrence Valley path.

"It is only by simulating the circulation of the ocean at 10 to 15 times the resolution previously achieved by modelers that we have been able to accurately capture the pathway that the meltwater would have taken in the ocean," Condron told OurAmazingPlanet.

The ocean apparently circulates in such a way that freshwater released farther northward near the Arctic can much more easily interrupt the sinking of surface waters in the Greenland and Labrador Sea that sets the pace of the Atlantic Meridional Overturning Circulation.

"In contrast, when the meltwater enters the ocean from the Gulf of St. Lawrence, ocean currents cause it to be confined largely to the sub-tropical North Atlantic about 3,000 kilometers (1,800 miles) south of the Greenland and Labrador Seas," Condron said. "As a result, it has little impact on the strength of the Atlantic Meridional Overturning Circulation, and therefore on climate."

These findings hint that shifts in the flow of water in the Arctic could dramatically alter today's climate.

"However, in our modern-day climate, there are no sources of freshwater as large as the glacial lakes or Laurentide Ice Sheet readily available to suddenly flood into the ocean," Condron said. "As a result, we should be cautious using this study as an analog for what might trigger modern-day abrupt climate change."

The researchers are now using their high-resolution model "to understand the sensitivity of our modern-day climate to increases in the melting of the large ice sheet over Greenland and changes in the hydrological cycle, such as increased river runoff of the Arctic in the near-future," Condron said.

Condron and his colleague Peter Winsor detailed their findings online Nov. 5 in the journal Proceedings of the National Academy of Sciences.