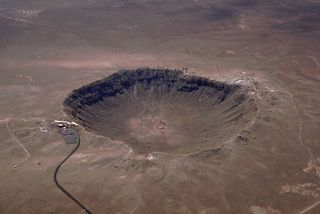 A 130-foot-meteor created the mile-wide Meteor Crater in Arizona. The comet proposed to have impacted life in North America was significantly larger, but no crater indicating its collision has been found.
(Image: © Dan Durda)

A comet crashing into the Earth some 13,000 years ago was thought to have spelled doom to a group of early North American people, and possibly the extinction of ice age beasts in the region.

But the space rock was wrongly accused, according to a group of 16 scientists in fields ranging from archaeology to crystallography to physics, who have offered counterevidence to the existence of such a collision.

"Despite more than four years of trying by many qualified researchers, no unambiguous evidence has been found [of such an event]," Mark Boslough, a physicist at Sandia National Laboratories in New Mexico, told LiveScience.

"That lack of evidence is therefore evidence of absence."

Almost 13,000 years ago, a prehistoric Paleo-Indian group known as the Clovis culture suffered its demise at the same time the region underwent significant climate cooling known as the Younger Dryas. Animals such as ground sloths, camels and mammoths were wiped out in North America around the same period. [Wipe Out: The 10 Most Mysterious Extinctions]

In 2007, a team of scientists led by Richard Firestone of the Lawrence Berkeley National Laboratory in California suggested these changes were the result of a collision or explosion of an enormous comet or asteroid, pointing to a carbon-rich black layer at a number of sites across North America. The theory has remained controversial, with no sign of a crater that would have resulted from such an impact.

"If a four-kilometer [2.5-mile] comet had broken up over North America only 12.9 thousand years ago, it is certain that it would have left an unambiguous impact crater or craters, as well as unambiguous shocked materials," Boslough said.

Boslough, who has spent decades studying the effects of comet and asteroid collisions, was part of a team that predicted the visibility of plumes from the impact of the 1994 Shoemaker-Levy 9 comet with Jupiter.

"Comet impacts may be low enough in density not to leave craters," Firestone told LiveScience by email.

He also points to independent research by William Napier at the University of Cardiff in the United Kingdom that indicates such explosions could have come from a debris trail created by Comet Encke, which also would not have left a crater.

A large rock plunging into the Earth's atmosphere may detonate in the air without coming into contact with the ground. Such an explosion occurred in Siberia in the early 20th century; the explosive energy of the so-called Tunguska event was more than 1,000 times more powerful than the atomic bomb dropped on Hiroshima.

"No crater was formed at Tunguska, or the recent Russian impact," Firestone said.

But Boslough said this math doesn't add up. The object responsible for the Tunguska event was very small, about 130 to 160 feet (40 to 50 meters) wide, while the recent explosion over Russia was smaller, about 56 feet (17 meters). The proposed North American space rock linked with the Clovis demise is estimated to have been closer to 2.5 miles (4 kilometers) across.

"The physics doesn't support the idea of something that big exploding in the air," he said, noting that the original research team doesn't provide any explanation or models for how such a breakup might occur. [The 10 Greatest Explosions Ever]

If such a large object crashed into the Earth, the resulting crater would be too large to miss, particularly when it was only a few thousand years old, Boslough said. He pointed to Meteor Crater in Arizona, which is three times as old and formed by an object "a million times smaller in terms of explosive energy."

"Meteor Crater is an unambiguous impact crater with unambiguous shocked minerals," Boslough said. If a 2.5-mile comet had broken into pieces, it could have made a million Meteor Craters, he added.

Firestone argued that water or ice could have absorbed the impact, possibly leaving behind no crater.

Boslough disagreed. Even if the comet had plunged into the ice sheet covering much of North America, the crater formed beneath it would still be sizable. "We wouldn't be able to miss that right now — it would be obvious," Boslough said.

The arguments and evidence against the impact were published in the December 2012 American Geophysical Union monograph.

Powerful impacts are Boslough's field, but the other 15 scientists working on the paper offered up other sources of counterevidence for the existence of a collision.

"We all independently came to the conclusion that the evidence doesn't support a Younger Dryas impact," Boslough said. [Asteroid Basics: A Space Rock Quiz]

"We all came to this based on our own very narrow piece of the puzzle."

For instance, the initial team studying the event announced the discovery of a carbon-rich black layer, colloquially known as a "black mat," at a number of sites in North America. Containing charcoal, soot and nanodiamonds, such material could be formed by a violent collision.

But this isn't the only possible source.

"The things they call impact markers are not necessarily indicators of high-pressure shocks," Boslough said. "There are other processes that potentially could have formed them."

Speaking of the black mat found in central Mexico, Firestone said, "Boslough is correct that there are other black mats, but these are dated to 12,900 years ago at the time of impact." He points to independent research published this fall that located hundreds to thousands of samples.

However, radiocarbon dating of one of the sites in Gainey, Mich., suggested its samples were contaminated.

Melted rock formations and microscopic diamonds found in a lake in Central Mexico last year were also suggested as evidence for the collision, but Boslough's team disagrees with the age of the sediment layer in the region.

Boslough said the standard for indicating a strong shock occurred is pretty high in the impact community, and the findings by the original team don't meet them. Nor do they offer up any physical models that propose how an impact or airburst would have occurred — and the ones Boslough has run just don't pan out.

"It's really a stretch to claim that there was this large impact event with no crater and no unambiguous shock material, because large impacts are such rare events," Boslough said.

"When somebody is making a claim that something extraordinary happened, something out of the ordinary and with a very low probability, and they have ambiguous evidence, then the default is that it didn't happen," he continued.

Firestone stands firm. "All the evidence has now been confirmed by others," he said.

"Boslough has no data supporting his arguments, and ignores the counter arguments of Bill Napier."