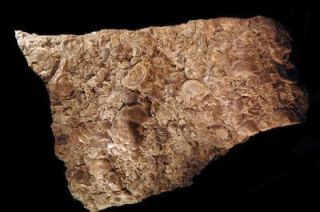 This slab of rock contains fossils of invasive species that populated the continent of Laurentia 450 million years ago after a major ecological shift occurred. Ohio University geologists found that rising mountains and cooling oceans prompted the spread of these invasive species.
(Image: © Alycia Stigall)

The rise of the forerunners of the Appalachian Mountains may have opened the gates for invasive species to storm the lost continent that gave rise to North America, new research suggests.

Such research could shed light on how to prevent the modern spread of invasive species, the scientists who studied the issue said.

Scientists investigated 450-million-year-old fossils of marine creatures that once dwelled in Laurentia, the continent North America once was part of. At that time, Laurentia straddled the equator and had a tropical climate.

Shifting of the Earth's tectonic plates during this period gave rise to the Taconic Mountains, forerunners of today's Appalachian Mountains. This left a depression behind the mountain range, flooding the area with cool, nutrient-rich water from the surrounding deep ocean into Laurentia's inland seas.

To learn more about the effects of this mountain-building and cooling water on the evolution of life in this area, researchers investigated the remains of clamlike animals known as brachiopods that dominated Laurentian seas. By analyzing subtle features of 53 species of these fossils, they deduced the family trees of evolutionary relationships linking these creatures to discern how these species evolved from one another.

"Our data show a very clear shift in evolutionary processes that coincides with a shift in Earth systems dynamics," researcher Alycia Stigall, a paleontologist at Ohio University, told LiveScience." In particular, these results shed light on the Earth system controls on how new species form, or speciation."

As geological changes slowly unfolded in Laurentia over the course of a million years, the fossils suggest two patterns of survival emerged among the creatures there.

During the early stage of the changes, native organisms became geographically divided, slowly evolving into different species suited for their different habitats. This process, called vicariance, is the typical method by which new species develop on Earth, Stigall said.

However, as these geological changes progressed, species from other regions of Laurentia began to directly invade habitats, a process called dispersal. Although biodiversity increased at first, dispersal reduced biodiversity in the long term, because it permitted a few aggressive species to populate and dominate many sites quickly, Stigall explained.

These findings could yield insights into what drives the dispersal of invasive species, which is currently threatening biodiversity worldwide.

"Only one out of 10 invaders truly become invasive species," Stigall said in a statement. "Understanding the process can help determine where to put conservation resources."

How Earth makes and destroys species

Overall, such research could help shed light on how changes Earth undergoes in turn drives the destruction and creation of new species.

"Scientists, both biologists and paleontologists, have spent a lot of time and effort studying extinction — the process by which the Earth loses species," Stigall said. "We understand many of those controls very well — [meteor] impact, volcanism, ocean acidification, habitat destruction. It is relatively easy to envision ways to reduce a population size to zero and thereby cause a species to go extinct."

"Understanding speciation is much more complex," Stigall continued. "Species form by breakdown of gene flow between populations. This is much harder to study on short timescales and the process is explicitly tied to a geographic place and ancestors, which requires understanding both geography and evolutionary history."

Future research on this period could study more types of marine life to see if they follow similar patterns of evolution. "I would like to consider additional intervals of geologic time that are characterized by species invasions, mountain building or oceanographic changes," Stigall said. "Is a shift in speciation style also present during those intervals?"

Stigall and her colleague David Wright detailed their findings online July 15 in the journal PLOS ONE.