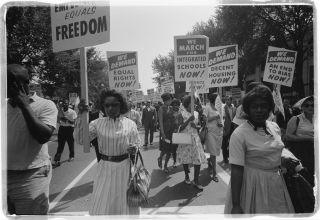 African-Americans carrying signs for equal rights, integrated schools, decent housing and an end to bias during the 1963 March on Washington.
(Image: © Library of Congress)

"Because they marched, America became more free and fair," President Barack Obama said yesterday (Aug. 28) as he stood on the steps of the Lincoln Memorial in Washington.

But 50 years after the March for Jobs and Freedom, when Martin Luther King Jr., delivered his stirring "I Have a Dream" speech, gaps between blacks and whites persist. Many of the issues remain the same as they did in 1963: Poverty, unemployment, voting rights and racial disparities in education. New burdens include the criminalization and mass imprisonment of blacks, both adults and children. [7 Reasons America Still Needs Civil Rights Movements]

Progress has stalled on civil rights, Obama said yesterday. He encouraged the tens of thousands of marchers at the memorial to continue fighting for civil rights. "America, I know the road will be long, but I know we can get there," Obama said.

Noliwe Rooks, a Cornell University professor and expert in racial inequality in education, agrees that America still needs a civil rights movement. "These inequities literally cost the country billions of dollars each year, and yet we do nothing as the problem gets worse," Rooks told LiveScience. "We simply have not had any federal legislation to substantively address racial segregation since the [1968 Fair Housing Act] and there doesn't seem to be the will to do so today," she said. (The act was meant to help end racial discrimination by homeowners and landlords.)

But Rooks thinks the current political and social climate makes it difficult to discuss race. "I absolutely think that we need a civil rights movement today, but I often joke that we could never have one focused on race and racial inequity, because everyone involved would be called a racist, or be accused of playing the race card," she said. "I think that is part of the reason we don't really seem to have noticed that in many places racial segregation has returned in full force and with it two distinctly different paths for many Americans based on race," Rooks said.

Surveys and polls show dwindling support among whites for civil rights. For example, a Pew Research Center poll found 70 percent of blacks think they are treated less fairly than whites in dealings with the police. Only 37 percent of whites said the same.

"There was broader popular support among whites in the 1960s for [changing] these kinds of inequalities," said Clarence Lusane, an expert in politics and race relations at American University in Washington, D.C. "That doesn't exist today." [Understanding the 10 Most Destructive Human Behaviors]

Today, though the black middle class has grown to about 10 percent of all black households, the unemployment rate remains twice that of whites (12.6 percent vs. 6.6 percent in 2012). Only 12 percent of white children live in areas of concentrated poverty, compared with 45 percent of black children, according to a 2012 report from the Economic Policy Institute.

The 1963 March on Washington was organized by A. Philip Randolph, who founded the first black labor union. Economic equality and jobs were as important to the marchers as freedom. "Yes, we want all public accommodations open to all citizens, but those accommodations will mean little to those who cannot afford to use them," Randolph said in his 1963 speech.

The poor are missing from modern discussions about civil rights, Lusane told LiveScience. "The language that comes from most policymakers is about saving the middle class, which is true, but there are also millions of middle class who are about to be much poorer," he said. The population of poor Americans in the suburbs, those living below the federal poverty line, grew by 64 percent between 2000 and 2010, according to the Brookings Institution.

But unlike the 1960s, there is no big push to fix the effects of poverty in America, Lusane said. "I would argue that we haven't seen that in decades."

But even when schools are racially mixed, students of color still face racial stereotypes, as they are shunted into special education more frequently than whites, and get less access to gifted programs and advanced placement classes. Government policies have also shifted the burden of paying for college onto students, creating a student debt crisis that limits access to higher education.

"What we have is an apartheid schooling system where your skin color and your ZIP code really decide where you have an opportunity to learn and follow your dreams," said Travis Gosa, a Cornell University professor whose research focuses on African-American youth and education.

Thanks to the War on Drugs, there are more blacks in the correctional system today — in prison or jail, on probation or parole — than in slavery in 1850, according to research by Michelle Alexander, a professor at Ohio State University. Blacks are 3.73 times more likely to be arrested for marijuana possession than whites, according to an American Civil Liberties Union report. Enforcing marijuana laws costs about $3.6 billion a year, the report said.

But even without arrests for drugs, blacks are put in prison at rates six times higher than whites, the NAACP finds. Controversial stop-and-frisk practices target people with black or brown skin color. In New York City, where a federal judge recently found the policy violates minorities' civil rights, only 10 percent of encounters result in arrests or tickets. "The humiliation an individual has to live with from day to day, it almost causes you to sour on the system," said Robert Harris, a Cornell University expert in African-American history.

Criminal records deny voting rights and lead to job, education and housing discrimination. Across the country, 13 percent of black men have lost the right to vote, according to the Brennan Center for Justice. The disenfranchisement, combined with new efforts by states to curtail voting rights, remind Harris of the post-Reconstruction period immediately following the Civil War.

"We live in an era where the old Jim Crow segregation has become Mr. James Crow, Esq.," Harris told LiveScience. "It used be raw, blatant, 'You're not allowed here,' and 'You can't vote,'" he said. "Now they say everyone is able to vote, but then there are laws passed reminiscent of the old understanding clauses during the post-Reconstruction era, which were used to disenfranchise African-Americans," he said. The understanding clauses were "literacy" tests used to exclude black voters. [Busted: 6 Civil War Myths]

The golden anniversary of the March on Washington is a reminder, Harris said: "African-Americans have to be more conscious of defending our rights. We can't let our guard down."