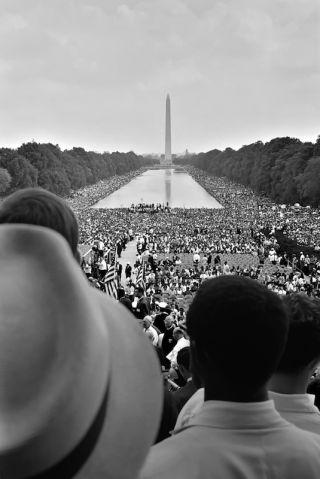 The crowd around the reflecting pool during Martin Luther King's March on Washington in 1963.
(Image: © U.S. Library of Congress)

Fifty years ago, Martin Luther King, Jr., told a crowd of some 250,000 people thronging the Washington Monument that he had a dream.

The March on Washington for Jobs and Freedom on August 28, 1963, was one of the largest demonstrations for human rights in United States history. Since then, there have been many marches on Washington, though none quite on the same scale or with the same impact. It's hard to predict what the next big one will be, but sociologists say it will take a network of organizations or a cause that resonates widely to mobilize people for such an event.

The significance of the 1963 March on Washington was partly about the event itself, but even more importantly, about the fact that it occurred during a major period of social insurgency, Andrews told LiveScience. Protests were taking place in cities all over he country, not just in Washington.

Achieving the success the March on Washington did requires connections. The original march involved half a dozen civil rights groups, from the National Association for the Advancement of Colored People (NAACP) to the Southern Christian Leadership Conference, as well as many church groups.

"You can't turn out large numbers of people without a network of organizations that can mobilize their members," said Clark McPhail, an emeritus professor of sociology at the University of Illinois at Urbana-Champaign. "It was true in the civil rights movement, and it has been true in the antiwar movement," McPhail said.

For example, anti-abortion and pro-abortion rights groups turn out massive crowds at rallies each year on the anniversary of the Supreme Court decision in Roe v. Wade.

But sometimes, a movement can be successful even without established organizations. Take the protests sparked by the Trayvon Martin verdict, or Cindy Sheehan's antiwar protests.

"An event really has to resonate with the public," said sociologist Deana Rohlinger of Florida State University. And it takes a lot of planning to put together a major demonstration, Rohlinger added.

Having a moving speaker like Martin Luther King, Jr., is important too, but celebrity presence alone may not be enough to make people come to Washington, Rohlinger said.

Protests have changed somewhat since the 1960s. "You don’t really need a big march on Washington now like you used to," Rohlinger said. With the internet and social media, anyone can recruit people to demonstrate. And a group doesn't need to come to Washington to show Congress and the President that it cares about a cause, Rohlinger said.

The Occupy movement is a good example. Sparked by the demonstration on Wall Street, the movement quickly spread to cities all around the country. While some people question its efficacy, "any movement that gets off the ground and mobilizes thousands of people is successful to some degree," Andrew said.

Yet unlike the March on Washington, the Occupy movement didn’t try to influence politics and policy, Andrew said. The Tea Party protests, by contrast, resulted in local and statewide networks that fielded political candidates.

Sociologists agree that predicting which cause will spur the next "March on Washington" is very difficult. But the impact such an event has is more obvious.

"You can't diminish the power of a face-to-face interaction," Rohlinger said, "Or the experience of going through something as powerful as a march or listening to a moving speaker like Martin Luther King, Jr."