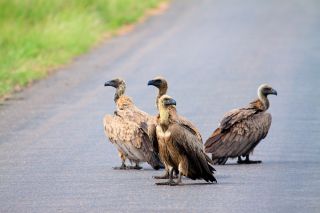 Though birds haven't yet learned how to read road signs, recent research suggests that birds can figure out the speed limit on a particular stretch of road.

Biologist Pierre Legagneux of the University of Quebec in Rimouski noticed that common European birds standing on the side of a roadway tended to fly away from an approaching car when the vehicle was at a particular distance from the birds.

The distance varied from one road to another, but not on the actual speed of an approaching car. "They reacted the same way no matter the speed of the car," Legagneux told National Geographic. [See Amazing Photos of Birds of Prey]

Were the birds able to determine the local speed limit (or the average speed of traffic) on certain roads? Daniel Blumstein, a wildlife behavior specialist at UCLA, believes there may be some degree of learning in the birds' response.

A speeding car, for example, could knock a roadside bird off its feet. "One or a few trials of getting knocked around may be sufficient for the bird to learn that cars are approaching faster on certain roads than other roads," Blumstein, who was not involved in the research, told NatGeo.

Birds' ability to learn from their environment is a constant source of surprise for researchers. Scientists have discovered, for example, that crows will use stones as tools to raise the water level in a pitcher and snatch a worm floating on the water (just like the clever crow in Aesop's famous fable).

And birds that have a bad experience with humans (such as being trapped and banded for wildlife studies) will remember those particular people's faces — and will teach their friends which humans are the "bad humans," even years after an unpleasant encounter.

Legagneux believes birds that learn to respond to cars based on the speed limits of certain roads have an advantage over those that don't. The birds that don't overreact to approaching cars can spend more time foraging for food (most of the birds studied were sparrows and carrion eaters like crows), while still protecting themselves from any approaching cars.

"This way, they are not spending a lot of time being vigilant by looking at the speed of each car," Legagneux said. The study is published in the latest issue of the journal Biology Letters.