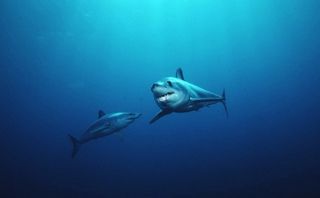 Two shortfin mako sharks, which are fast-moving and streamlined fish. They propel themselves through the water with short strokes of their thick, powerful tails.
(Image: © Credit: Southwest Fisheries Science Center, NOAA Fisheries Service)

Christine Xu is a programassistant in the China Program and Energy & Transportation Program for the Natural Resources Defense Coundil (NRDC). This post is adapted from one that appeared on the NRDC blog Switchboard. Xu contributed this article to LiveScience's Expert Voices: Op-Ed & Insights.

Ever since "Jaws" inflicted a collective fear of sharks upon the public, shark conservationists have strongly supported the Discovery Channel's Shark Week, which was produced specifically to raise awareness and to debunk some very common myths about sharks.

But the reality is that there are still many people who are not aware of the importance that sharks have on balancing the marine ecosystem, the dangerous decline of the shark population or the practice of finning, where sharks are harvested from the ocean solely so their fins can be removed for people to eat.

It is mind-boggling to see the number of sharks killed by man vs. the number of people killed by sharks each year. Yet, some people of my own culture (Chinese-American) remain adamant about serving shark-fin soup during banquets and weddings. Just recently, one of my best friends, who is also Chinese-American, complained about how expensive her wedding dinner was going to be (roughly $1,000 per table that seats 10 guests). When I asked why it cost $100 per person, she said it was because her in-laws insisted on serving shark-fin soup in order to "give face" (给面子). While she and her fiancé didn't care for the expensive dish, the last thing they wanted to do was defy their parents. I pleaded with her to convince her in-laws to at least provide an opt-out choice for their guests (which, they did).

Certain sectors of the Chinese-American community, such as those that opposed California's ban on the sale, trade and possession of shark fins, claim that a ban is an attack on Chinese culture. Is this the case? Let's examine the claim, along with other shark-fin myths.

Banning shark fin soup is an attack on Chinese culture

Although shark-fin soup dates back hundreds of years in China, it is a delicacy that has only been available to the wealthy and is by no means a representation of Chinese culture as a whole. Because shark-fin soup has traditionally been a luxury item, the rising middle-class will order it for their guests simply to prove that they can (the aforementioned concept of "saving face"). To dissociate the cultural concept of serving shark-fin soup from saving face will require more time, but the good news is that many Asian countries are beginning to realize the seriousness in the decline of shark populations as a result of finning. China has already banned shark-fin soup at government banquets, highlighting the country's new attitude toward curbing extravagance. Meanwhile, major Asian airlines have banned shark-fin cargoes and hotels have removed shark-fin soup from their menus.

While some Chinese restaurants claim a ban would hurt their routine business, shark-fin soup is most often served in banquets or weddings at big Chinese restaurants. In fact, according to Business Insider, many businesses have stopped selling fins as a "purely business" decision, as more people are aware of finning and beginning to avoid the product, and some restaurants have even voluntarily removed shark-fin soup from their menuafter receiving comments from patrons that they will no longer dine at restaurants that sell the soup. Eventually, all businesses that have profited from unsustainably sourced goods will have to look for alternative sources of revenue.

Researchers at the Ocean University of China found that not only do shark fins lack nutritional value, but they could actually be dangerous to human health. Large fish, such as sharks, that are at the top of the food chain accumulate the mercuryconsumed from smaller fish. A sampling of shark fins sold at a Thai market showed that 70 percent contained high concentrations of mercury, some of which were 42 times over the acceptable level for human consumption. Pregnant women are particularly advised to avoid shark meat consumption as mercury could have harmful neurological effects on fetuses.

Sharks have no direct benefits to humans.

Sharks have evolved to move through water with high-efficiency and speed, and with an ability to auto-clean parasites from their bodies. Scientists are using the same concept to develop surfaces for medical devices in healthcare environments to reduce bacteria and infections, while boat manufactures are using such knowledge to develop coatings to reduce drag and limit the use of harsh chemicals needed to clean a ship's hull of adhering organisms.

As apex predators, sharks also play a critical role in balancing the marine food chain. For example, declines in shark populations could devastate other fish populations and eventually lead to the loss of healthy coral reefs, which is the essential breeding ground for various marine species. As shark populations decline, carnivorous fish populations grow and consume more herbivorous fish, which graze on algae. Without herbivorous fish, algae would dominate reefs and hurt marine biodiversity while also jeopardizing over $100-million-worth of coral reef fisheries (in the United States alone).

As global fisheries become increasingly threatened, it's important that people better understand the powerful myths that contribute to the dangerous shark-finning trend. Finning is one of the greatest threats to the survival of the shark species, and the justifications for shark-killing are built largely on fantasies and fiction. The good news is that in China and other Asian nations, those myths are now increasingly being acknowledged, because protecting sharks is a cultural tradition we all need to adopt.

This piece is adapted from the post True or False? Common Myths about Shark Fins. on the NRDC blog Switchboard. The views expressed are those of the author and do not necessarily reflect the views of the publisher. This article was originally published on LiveScience.