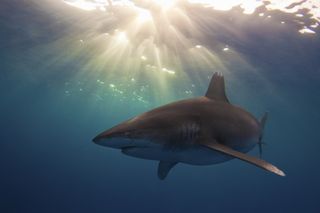 Last week, in the 9th Circuit Court of Appeals, a panel of three federal judges heard arguments from a Chinese-American business association and other shark-finning interests against a California law banning the sale and possession of shark fins.

The shark-finning interests suggested the state law — which passed the California legislature with strong bipartisan majorities before Democratic Governor Jerry Brown signed it — should be preempted by federal law and declared unconstitutional because it is discriminatory. The state of California, The HSUS and other groups defended the law as an appropriate exercise of state authority.

None of this is all that surprising, except for the other party involved in the proceedings: the Obama administration, through the U.S. Department of Justice (DOJ).

The DOJ weighed in with an amicus brief asking that the federal court overturn the law, largely because the National Marine Fisheries Service regulates shark fishing in U.S. waters and has exclusive authority to say whether states can regulate the sale of shark-based products in state markets.

This is the second time that the Obama administration has tried to invalidate a California animal-protection statute. The administration has also submitted an amicus brief in support of the meat industry's challenge to California's anti-downer law, which passed in the wake of The HSUS' hallmark investigation exposing the inhumane treatment and slaughter of animals too sick or injured to walk, known as "downer" animals.

The administration argued that the Federal Meat Inspection Act preempted California's law, and that only the federal government could regulate the care and handling of downer pigs at federally inspected slaughter plants. This case made it to the U.S. Supreme Court, whose members overruled the 9th Circuit ruling that was in our favor and nixed core portions of that California anti-cruelty law. Today, downer pigs still continue to be abused and slaughtered at federal meat processing facilities, including in California.

The burning question is, why is the administration aligning itself with the meat industry and shark-finning interests on these important questions? And why does it argue that only the federal government, not the states, can speak on these matters?

It's hard to know, but in both cases, the agencies involved — the U.S. Department of Agriculture (USDA) on the downers and the National Marine Fisheries Service (NMFS) on finning — have developed cozy relationships with the industries they regulate. The USDA goes out of its way to promote industrial animal agriculture, and NMFS works hand-in-hand with many sectors of the fishing industry, including people who kill sharks and then want to trade-in their parts.

In this case, a state isn't regulating shark fishing or fisheries; it's simply stating that it does not want to allow an in-state market for detached shark fins and shark-fin products, which fuels the cruel and unsustainable practice of finning worldwide. The states can, and should, be allowed to set that kind of standard, just like they should be able to ban the trade in ivory or rhino horn in their jurisdictions.

Just as with the King amendment — where Congress, in an even more sweeping way, is trying to nix state anti-cruelty laws in the form of an amendment to the Farm Bill — this Administration is threatening meaningful animal-welfare lawmaking at the state level.

Traditionally, it is the states that have provided the strongest standards against cruelty, and that work is critical because the Congress and the federal executive agencies often are too timid to tackle these policy questions, or even worse, they are too beholden to animal exploitation industries.

When you add up the votes in eight state legislatures that passed bans on shark-fin products, it was 914 "ayes" and 87 "nays." Why would the Obama administration substitute its judgment for that of nearly a thousand state lawmakers who acted in the interest of their own states and citizens?

Dozens of federal lawmakers wrote to the administration telling them to back off on their attacks on state anti-shark-finning laws. It does not appear, based on last week's federal court proceedings, that anyone at the White House or the NMFS is heeding that message.

Pacelle's most recent Op-Ed was American Running of the Bulls Not Much of a Thrill. This article was adapted from Obama Administration Seeks to Nullify Critical State Animal Cruelty Laws, which first appeared as on the HSUS blog A Humane Nation. The views expressed are those of the author and do not necessarily reflect the views of the publisher. This article was originally published on LiveScience.