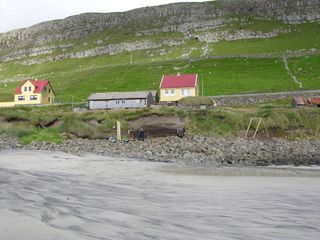 Scientists have discovered evidence for the human colonization of the Faroes, located halfway between Norway and Iceland, by people some 300 to 500 years before the large-scale Viking colonization. The investigation revealed an extensive windblown sand deposit containing patches of burnt peat ash from human activity.
(Image: © Durham University.)

One of the first stepping stones for Europeans as they explored across the Atlantic to ultimately land in the Americas was colonized much earlier than previously thought — and not by the Vikings, who were once thought to be the pioneers of those isles, researchers say.

The Faroe Islands are located about halfway between Norway and Iceland. They were the first stepping stones beyond the Scottish archipelago of the Shetlands for the Viking diaspora that culminated in the European discovery of continental North America in the 11th century, about 400 or 500 years before Christopher Columbus made his famous voyage.

Until now, scientists thought the Vikings undertook the first major settlement of the Faroes in the ninth century. Still, there were hints there might have been earlier arrivals there — for instance, in about 825, the Irish monk Dicuil in the court of Charlemagne wrote of Irish hermits settling islands beforehand that may have been the Faroes, researcher Mike Church, an environmental archaeologist at the Durham University in England, told LiveScience in an interview. [Fierce Fighters: 7 Secrets of Viking Seamen]

Now, scientists have discovered firm archaeological evidence "for the human colonization of the Faroes by people some 300 to 500 years before the large-scale Viking colonization of the ninth century, although we don't yet know who these people were or where they came from," Church said in a statement.

The research took place at an archaeological site of Á Sondum on the island of Sandoy. The investigation revealed an extensive windblown sand deposit containing patches of burnt peat ash from human activity.

This ash contained barley grains burnt in domestic hearths, which carbon dating showed was pre-Viking. Barley is not indigenous to the Faroes, so it must have been either grown or brought to the islands by humans.

"This is the first archaeological evidence that proves there were humans there at the Faroes prior to the big Viking colonization event," Church said.

Humans would have spread these ashes onto the sands during the fourth to sixth centuries and sixth to eighth centuries. This practice was often seen in the North Atlantic region among Europeans during this period to stabilize the dunes and keep the wind from eroding them away.

"The majority of archaeological evidence for this early colonization is likely to have been destroyed by the major Viking invasion, explaining the lack of proof found in the Faroes for the earlier settlement," Church said.

It remains unknown who these newly discovered settlers were. Possibilities may include religious hermits from Ireland, late-Iron Age colonists from Scotland or pre-Viking explorers from Scandinavia. [The 10 Most Intrepid Explorers]

"Maybe these were intrepid explorers arriving from each of those areas," Church said, adding that the findings raise more questions than they answer.

"Although we don't know who the people were that settled here and where they came from, it is clear that they did prepare peat for use by cutting, drying and burning it, which indicates they must have stayed here for some time," researcher Símun Arge, of the National Museum of the Faroe Islands, said in a statement.

The research challenges the scale, timing and nature of human settlement of the wider North Atlantic region.

"This also raises questions about the timing of human activity on other island systems where, similarly, evidence may have been destroyed," Church said.

Arge agreed. "We now have to digest these dates of this early evidence in relation to other sources and consider whether there may be other similar sites, elsewhere on the islands, which may be able to provide us with further structural archaeological evidence," Arge said.

It may be a major challenge finding more evidence of these ancient settlers, Church noted.

"We're likely looking at very small numbers of people, so there won't be that much to find, and the big Viking colonization event probably involved quite a lot of Viking longhouses put in the same sorts of places where these early settlers put houses, so a lot of what little evidence there was may be destroyed," Church explained.

The scientists detailed their findings online July 17 in the journal Quaternary Science Reviews.