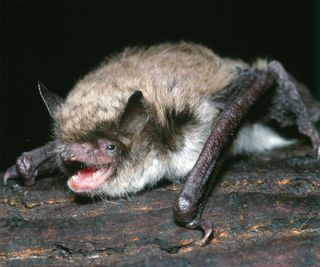 The Brandt's bat is one of smallest mammals with exceptional longevity.
(Image: © Milos Andera, http://www.NaturePhoto-CZ.com)

The longest-living bat species may owe its exceptional life span, at least in part, to its genes, a new study suggests.

The study researchers analyzed the genome of the Brandt's bat, a species of vesper bat that can live to be at least 41 years old.

Although life span   is typically linked with physical size — with bigger animals usually living longer — bats are an exception to this rule. In fact, Brandt's bats, which weigh about 4 to 8 grams (0.14 to 0.28 ounces), have the longest life span for their body size, the researchers said. [See Extending Life: 7 Ways to Live Past 100].

Genome sequencing revealed that Brandt's bats have about 22,000 genes, which is about the same number of genes other mammals have.

Genes for two proteins involved in growth — called growth hormone receptor (GHR) and insulinlike growth factor 1 receptor (IGF1R) — showed changes that also appear among other long-lived bat species. Previous studies in mice and other animals suggest genetic changes in GHR and IGF1R are linked with longevity. For instance, mice with mutations in GHR live twice as long as normal mice,said study researcher Vadim Gladyshev, a geneticist at Brigham and Women's Hospital in Boston.

These same genetic changes also may be responsible for the bats' small size: Mutations in GHR in mice and humans result in dwarfism, the researchers said.

"We think the bat's life span is, in part, an untended consequence of its small body size," Gladyshev told LiveScience.

Brandt's bats also hibernate and roost in caves — behaviors that may help them avoid predators and extreme weather conditions, and contribute to their longer life span, the researchers said. The Brandt's bat also takes a relatively long time to reach maturity, and it does not produce many offspring — two characteristics seen in larger, longer-living mammals.

The researchers have sequenced the genomes of other animals that are long-lived for their size, such as the naked mole rat. "Interestingly, several adaptations that contribute to longevity of these species seem to be different, suggesting that there are many routes to a long life span," Gladyshev said..

The study is detailed today (Aug. 20) in the journal Nature Communications.