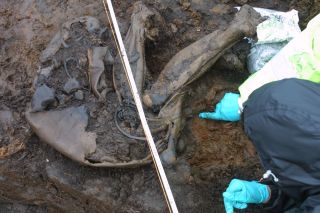 Cashel Man, discovered in central Ireland, is thought to have been a young king who was ritualistically sacrificed.
(Image: © Ossory, Laois, and Leinster)

Archaeologists have unearthed the remains of a 4,000-year-old man preserved in an Irish peat bog, marking the oldest European bog body ever found with skin still intact.

The cool, waterlogged conditions of Northern European bogs (a type of wetland) create low-oxygen, highly acidic environments ideal for body preservation. As a result, hundreds of "bog bodies" dating back thousands of years have been uncovered in the region, but many have shriveled down to mostly skeletons and tend to be closer to 2,000 years old.

A resident of central Ireland's County Laois came across the well-preserved "Cashel Man" — named for the bog he was found in — while milling for peat moss, which is used for a variety of farm purposes, including animal-bedding and field conditioning. [See Images of Cashel Man & Other Bog Bodies]

Having realized that he had come across a human body, the resident notified archaeologists at the National Museum of Ireland, who later conducted a formal excavation of the site. A summary of the dig appeared in the latest edition of the Irish journal Ossory, Laois, and Leinster.

"All that was visible to start with was a pair of legs below the knees, and a torso," Eamonn Kelly, an archaeologist at the National Museum and lead excavator of the project, wrote in the report. "The body appeared to be naked. Later, it was possible to work out that the torso had been damaged by the milling machine, which also removed the head, neck and left arm."

The team calculated the age of the body using radiometric carbon dating, in which the constant decay rate of radioactive carbon-14 is used to estimate age based on remaining levels of carbon-14 in the dead tissues. Surprised to find the body was roughly 4,000 years old, the team dated the peat above and below the body to confirm the results, and came up with about the same age. Previously, the oldest bog body ever found in Ireland was 1,300 years old, according to the Irish Times.

The team conducted computed tomography (CT) scans of the body after the dig, and found that the young man's arm and spine had been broken multiple times, seemingly from sharp blows before his death.

The researchers also found cuts along the man's back that looked like ax wounds. They uncovered axes capable of producing such wounds within the vicinity of the site.

Given this evidence of brutality, the team concluded that the young man had been killed in a ritual sacrifice, a practice commonly known in later eras, but not well documented in the Early Bronze Age of 2000 B.C., about the time this bog body would've lived.

"All the indications are that the human remains from Cashel Bog tell of the fate of a young king who, through folly or misadventure, was deemed to have failed to appease the goddess on whose benevolence his people depended, and who paid the ultimate price," Kelly wrote.

The international anthropology community has also taken note of the significance of this finding.

"This is really quite special," said Glen Doran, an anthropology professor at Florida State University who studies remains from North American bogs and was not involved in the study.

Any remains preserved as well as Cashel Man provide important opportunities to study past cultures, but Cashel Man's unusually old age makes him a particularly fruitful find. "There are fewer places that have deposits of that age, so when you find them, they represent very remarkable windows into the past," Doran said.

Editor's Note: This story has been updated to clarify that this is the oldest European bog body to have been discovered with skin intact, not the oldest body. An older body was discovered in a glacier.