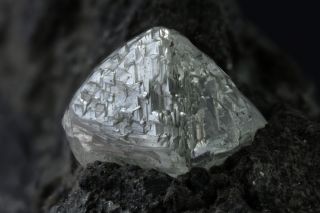 Diamonds form deep within the Earth, and then travel to the surface within volcanic rocks, such as this kimberlite.
(Image: © ChinellatoPhoto | Shutterstock)

Canada, Russia and southern Africa currently dominate the world diamond market. But, in recent years, geologists have debated whether southeast India could produce large quantities of diamonds as well. Now, research from a group of geologists at the National Geophysical Research Institute in Hyderabad, India, suggests that southeastern regions of the country do, in fact, contain the right ingredients for these gems to form in abundance. A report of their findings appeared earlier this month in the journal Lithosphere.

Diamonds form deep within the Earth's mantle and erupt to the surface within volcanic rocks called kimberlites and lamproites. The team discovered such diamond-bearing rocks by chance while conducting an unrelated geologic survey and decided to investigate the sites further as a side project.

"We thought that it may be a good idea to conduct further research on this crucial aspect to propose a suitable and cost-effective reconnaissance technique that can be deployed as a quick search tool over large areas for diamond prospecting," said geologist Subrata Das Sharma, an author on the paper. [Shine On: Photos of Dazzling Mineral Specimens]

Instead of tediously searching an entire landscape for diamond-bearing rocks — which tend to crumble easily and are often difficult to identify — geologists have devised a variety of techniques to search for key diamond-forming conditions within the mantle, and then later explore promising areas on land.

These diamond-forming conditions include extremely high temperatures and pressures, found only in the deepest depths of the Earth's lithosphere — a region including the entire Earth's crust and the solid upper mantle that rests above the more molten lower mantle where crystals melt into magma.

Without the heat and pressure of the deep lithosphere, carbon — the only ingredient in diamonds — takes on the less valuable form of graphite.

The lithosphere varies in thickness across the planet, and does not always reach depths deep enough to facilitate diamond growth. Das Sharma and his team sought to find out how thick the lithosphere is under India, and did so by looking at seismic data collected during several relatively recent earthquakes. Since seismic waves travel at different speeds and amplitudes depending on the material they pass through, seismic data can reveal the transition from the hard upper mantle to the molten lower mantle, which is the lower boundary of the lithosphere.

Previous studies based on seismic data have suggested that southeastern India rests atop a thin portion of the lithosphere. But Das Sharma and his team reanalyzed related data using different techniques, and discovered a signal much deeper indicating the lithosphere reaches down far enough to facilitate diamond growth.

The team also examined existing analyses of the chemical composition of nearby rocks on the surface to further confirm that the temperature and pressure conditions would have been extreme enough to support diamond growth.

These findings could lead to increased diamond mining in the country, but this will depend on the interests of mining companies, Das Sharma said.

"Diamond mining could become viable once an appropriate mining strategy is worked out," Das Sharma said. "This needs concerted efforts in field detection of generally obscured kimberlites and lamproites in a region." [Infographic: Tallest Mountain to Deepest Ocean Trench]

While the team's techniques are relatively quick and cheap, geologists elsewhere have developed other efficient methods for diamond prospecting as well. For example, some use electromagnetic tools that measure the conductivity of the mantle in search of carbon-rich areas (because carbon is highly conductive, or allows for the easy flow of electrons), while others use seismic imaging techniques that illustrate physical boundaries within the mantle.

Still, this new study demonstrates how to use effective and relatively cheap techniques that could help smooth the way for future diamond exploration programs around the world, according to Alan Jones, a geologist at the Dublin Institute for Advanced Studies in Ireland who was not involved in the study.

"This has really cleared up this Indian lithosphere issue," Jones told LiveScience. "In terms of global impact, I would say the paper is on part of the cutting edge along with other people's work."

The team members plan to share their results with the Indian government, and to continue honing their research methods to develop even more efficient diamond-hunting techniques.