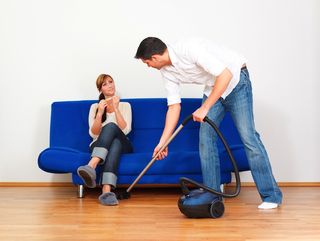 A man's job may influence how much housework he does at home, a new study finds.
(Image: © Guy cleaning house photo via Shutterstock)

What could make a man start doing a larger share of a couple's housework?

Switching into a traditionally female job maybe one way, according to a new study.

Looking at several thousand people from 1981 through 2009, sociologist Elizabeth McClintock examined whether switching into a job that is predominated by the opposite gender influenced the way housework is divided in couples.

The study found that men who were in relationships who switched into occupations once regarded as female — such as teaching, childcare work or nursing — spent more time doing housework, compared to when they held traditionally male jobs. Meanwhile, their female partners reduced their housework hours.

The same was true for women. When women switched into a female-dominated job, they tended to spend more hours doing housework than they used to, according to the study, which was presented today (Aug. 13) at the meeting of the American Sociological Association in New York

"Inequality in housework is a contentious issue in many marriages," said McClintock, who studies inequality in romantic relationships at University of Notre Dame in Indiana. Compared with previous decades, women now spend fewer hours doing housework, and men now participate more, but the gap hasn't closed, she said. Women continue to take on a larger share of housework.

In researching the factors driving the dynamics in relationships, sociologists usually see income as the main source of power, McClintock said. According to this view, whichever spouse earns more has more negotiation power, and will do less housework. [Busted! 6 Gender Myths in the Bedroom & Beyond]

But income is not the only source of power in relationships that influences how housework is shared, McClintock said. Other factors, such as working at a job that is predominately occupied by women can affect a man's relationship at home too, she said, and this could play out in several ways.

One possible way is that men would avoid doing housework, to compensate for the emasculating effects of having a female job.

"I did not find evidence that men compensate for the emasculating effect of working in a highly-female occupation by reducing their housework contributions," McClintock said. "This may be because men do not feel emasculated by working in female jobs," she said.

Alternatively, it could be that men who work in traditionally female jobs suffer the stigma that still surrounds gender barriers, which makes them less desirable in the relationship market. They then may become more dependent on their current relationships, because their prospects elsewhere have reduced, McClintock said.

"It may be too risky to use housework as their means of reasserting masculinity — angering their wives," McClintock said. "Instead, men actually do more housework, presumably to reduce their prospects of divorce."

Single men and women, however, were not affected by the gender composition of their job, the study found. They did not reduce or increase their housework hours according to how feminine or masculine their job was.

This suggests that it's not the gendered nature of the job that influences people, but rather, "occupation influences housework through interactions and negotiations between romantic partners," McClintock said.