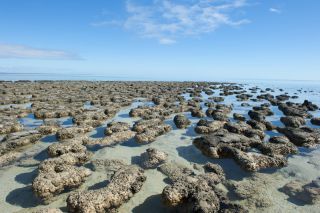 Researchers have reconstructed the structure of 4-billion-year-old proteins.

The primeval proteins, described today (Aug. 8) in the journal Structure, could reveal new insights about the origin of life, said study co-author José Manuel Sanchez Ruíz, a physical chemist at the University of Granada in Spain.

Exactly how life emerged on Earth more than 3 billion years ago is a mystery. Some scientists believe that lightning struck the primordial soup in ammonia-rich oceans, producing the complex molecules that formed the precursors to life. Others believe that chemical reactions at deep-sea hydrothermal vents gave rise to cell membranes and simple cellular pumps. And still others believe that space rocks brought the raw ingredients for life — or perhaps even life itself — to Earth. [7 Theories on the Origin of Life]

But it's difficult to recreate events that happened so far in the distant past.

Sanchez Ruiz and his colleagues decided to study a class of proteins called thioredoxins, which perform dozens of cellular functions in organisms across all three domains of life: Archaea, Eukaryotes and Bacteria. The proteins' broad functionality and presence in all life forms suggests they have primordial roots, the researchers said.

The team analyzed all the differences between the versions of the proteins found in organisms in each domain, and mapped those differences to the dates when the organisms are believed to have diverged.

Using that information, they determined the likely amino acid sequence of the ancient thioredoxin proteins, which spawned all other versions and existed in the most primitive life.

They then recreated the protein in the lab. The "fossil" protein was incredibly stable, bound to many different chemicals and functioned well in a highly acidic environment.

"That makes a lot of sense because 4 billion years ago, many people think that the temperature was high and the oceans were acidic," Sanchez Ruíz told LiveScience.

Of course, there are no traces of these ancient proteins, so there's no way to know for sure how closely the reconstructed proteins resemble the originals.

"There is no way to make absolutely certain unless we invent some kind of time machine," Sanchez Ruíz said. "But we know that the properties we measure for these proteins are consistent with what we would expect of 4-billion-year-old proteins."