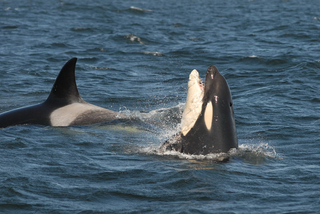 The orca calf playing with a plastic bag.
(Image: © Center for Whale Research)

Researchers snapped a picture of a baby killer whale in the Pacific Northwest holding a plastic bag in its mouth, just the latest example of plastic pollution in the world's oceans. Last month, scientists from the Center for Whale Research monitoring orcas in the Salish Sea say they spotted a calf playing with what at first looked like a small scrap of blubber. When the baby whale dropped the item from its mouth, they realized it was actually a plastic bag.

Rogue plastic trash can be a problem when it gets into the mouths of the ocean's animals like whales, turtles and seals, but it can even harm creatures deep beneath the surface. One group of researchers recently published a database of trash on the seafloor from California to Canada and offshore of Hawaii. They found that most garbage in their catalogue was plastic, and of those items, more than half were plastic bags, some choking corals nearly 7,000 feet (2,115 meters) below.

Even the plastics we can't see are troubling. One of the most infamous examples of plastic pollution is the great Pacific garbage patch, a Texas-sized amalgamation of confetti-like debris that's barely noticeable to the naked eye. Fish mistake these tiny bits of plastic for prey, and the toxins inside these pieces of debris enter the food chain.