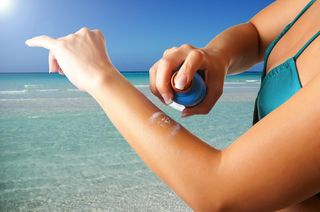 If you've heard it once, you've heard it a thousand times: putting on sunscreen and avoiding too much direct sunlight are important in preventing skin damage, signs of aging and cancer.

But this wasn't always a given. Although in many cultures people used to cover their bodies with oils, extracts, hats and clothing when venturing into the sun, people once thought that the sun's heat, rather than its radiation, caused the painful redness of sunburns.

One of the first experiments showing that something other than heat burns the skin was done by Sir Everard Home, an English physician, in 1820. Home exposed one of his hands to the sun, while covering the other with a black cloth. Only the exposed hand got sunburnt, but a thermometer showed the temperature around the covered hand was a few degrees higher.

Later, in 1889, Johan Widmark proved that it was mainly the ultraviolet rays, rather than luminous rays, that caused the redness of sunburned skin. His findings preceded the first medical recommendations of protection against sunlight, advice that continues to this date.

Sunscreens have since been evolving -- from pastes to creams, to lotions and sprays, and perhaps someday a pill. Here are five interesting things to learn about sunscreens:

Apart from umbrellas and hats, ancient cultures used a variety of sunscreens made from herbal extracts or mineral crusts to protect against the sun's rays. These early sunscreens included ingredients like rice bran oil, iron, clay and tar. In more contemporary times, sunscreens were developed from horse chestnut extracts in the 1910s. This pasty sunscreen was sold under the name of Zeozon. In the 1930s, Ambre Solaire was introduced, an oily sunscreen that was easier to apply to the skin.

Sunscreens have even been subject to "Top Secret" military research. In the 1940s, the U.S. Army and Air Force asked the American Medical Association for advice about the most effective sunscreen for soldiers. Researchers examined the effectiveness of 12 compounds and concluded that red veterinary petrolatum can be an effective, waterproof sunscreen.

One of biggest steps in sunscreen's development has been the transition from the white paste of early sunscreens to an almost invisible cream. In older sunscreens, the light-reflecting compounds could appear white because they were not small enough. With nanotechnology, however, ingredients such as titanium dioxide are turned into small, invisible particles.

2. How does sunscreen work?

Sunscreens can be made of two types of ingredients: inorganic particles, such as titanium dioxide or zinc oxide, or organic components, such as herbal extracts or compounds like oxybenzone.

Dr. Shannon Trotter, professor of dermatology at the Ohio State University, says it is optimal to use a combination of both types of sunscreen, those providing chemical protection and those offering physical defenses. You can tell which is which by looking at the labeling required by the FDA.

Most sunscreens today have both types of ingredients. The concept of sun protection factor (SPF) was introduced in the 1960s. SPF indicates how long a sunscreen protects the skin. Physicians recommend SPF 15 and SPF 30. Higher SPFs may not actually provide longer hours of protection, especially because the cream is usually washed off or absorbed after two hours.

3. Does sunscreen prevent people from getting vitamin D?

The body needs sunlight to produce vitamin D. So should we worry that wearing sunscreen may lead to vitamin D deficiency?

Studies have yielded mixed results, but large trials have shown that although sunscreen does lower the amount of vitamin D produced by the skin, these effects are not significant.

The American Academy of Dermatology does not recommend getting vitamin D from sun exposure; instead, the academy recommends getting this nutrient from the diet, by eating foods naturally rich in vitamin D, and from vitamin supplements. Foods that have high levels of vitamin D include fish oil, salmon and sardines, soy milk, eggs, fortified dairy products and mushrooms.

4. The most recent sunscreens: spray-ons

The innovation of spray-on sunscreen brought ease of application to a whole new level. But are these products effective and safe?

Recently, the FDA warned against wearing spray-on sunscreen near open flames. In five incidents, people wearing the spray-on protection near sources of flame suffered significant burns. Although the specific products linked with these cases were recalled and are no longer on the shelf, many other spray-on sunscreen products may contain flammable ingredients, such as alcohol, and could catch on fire if they are too close to flames.

Trotter said spray-on sunscreen is effective if applied properly. "Some people spray it from too far away and only get a mist," she said, "The biggest challenge is to know how you actually use enough to cover all the areas of the body."

Another concern with sprays is toxicity. The FDA is investigating the health risks of accidentally inhaling spray-on sunscreen. Trotter recommended using a lotion for areas near the mouth and using spray for hair-bearing areas where it's difficult to apply a cream.

You need a volume of one shot-glass–worth of sunscreen to cover the body, and you should apply sunscreen 15 minutes before going outdoors. Don't forget the lips, Trotter said.

The Centers for Disease Control and Prevention recommends using a broad-spectrum sunscreen that protects against UV-A and UV-B rays, and has an SPF of at least 15. People should check the expiration date, because some sunscreen ingredients might degrade over time or develop bacterial growth.

It's also recommended that people with oily skin or those who are prone to acne use a water-based sunscreen. And people sensitive to para-aminobenzoic acid (PABA) should buy brands that do not contain the compound.

The FDA recommends not applying sunscreen on babies younger than 6 months old. Instead, babies should be placed in shady areas or covered with clothing.