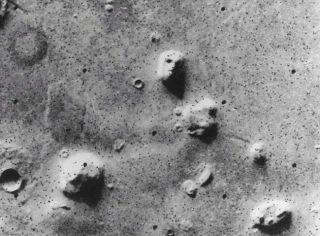 NASA's Viking 1 Orbiter spacecraft photographed this region in the northern latitudes of Mars on July 25, 1976 while searching for a landing site for the Viking 2 Lander.
(Image: © NASA.)

The ability to take in visual cues and basically fill in the blanks allows humans to process information very quickly, but new research shows that it also can lead to misperceptions - like seeing things that are not there.

"It's a manifestation of over-learning, such as when we find a man's face on Mars' surface or in a forest or on a cloud," said Takeo Watanabe of Boston University. "We've over-learned human faces so we see them where they aren't."

In 1976, NASA's Viking 1 Orbiter spacecraft photographed a small patch on the surface of Mars.? The shadows from one of the mesas gave many the impression of a human face - a face that has taken on a certain life of its own.

To study how our eyes may sometimes fool us, Watanabe and his colleagues have studied perceptional learning - the increased sensitivity to a stimulus due to repeated exposure.

In a telephone interview, Watanabe gave the example of cars, which most of us see every day without thinking about them.? This automatic processing can be an advantage because we can respond immediately to an oncoming car.

But having this information so ingrained can also cause us to mistake things that are not cars.

To show how this can happen, the researchers trained people in a lab setting with what were essentially "subliminal messages."

Subjects watched a computer screen with moving dots that were made so faint as to be almost invisible.? In a preliminary test, the subjects could not guess which way the dots were moving.

During a subsequent training session, the subjects were asked to identify letters on the screen - while the dots continued to move in the background.?

"They learned without even noticing it," Watanabe said.?

But these guesses had nothing to do with what the subjects were currently being shown during the second test.? In fact, in some cases, there were no dots at all on the screen.

"Learning has been regarded as only good for us," Watanabe said.? "But the downside is if you learn something too well you may not see what is really there."

These findings are reported in this week's issue of the Proceedings of the National Academy of Sciences.