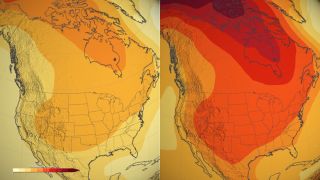 The United States will be a much hotter place at the end of the 21st century, according to a new climate change visualization released by NASA this week.

The video illustrates a small component of the upcoming National Climate Assessment, set to come out in 2014, which provides Congress with the most up-to-date information on the state of climate change in the country from more than 240 contributing climate scientists. The last report was published in 2009.

Researchers at NASA's Goddard Space Flight Center teamed with scientists at the National Oceanic and Atmospheric Administration's National Climatic Data Center (NCDC) in Asheville, N.C., to create a new video, which compares two different climate change scenarios: One in which atmospheric carbon dioxide levels increase from today's level of 400 parts per million to 550 ppm, and a second in which carbon dioxide levels double to 800 ppm. (Parts per million means that, for example, for every million molecules of air, 400 of them are carbon dioxide.)

These carbon dioxide concentrations are based on high- and low-emissions scenarios proposed by the Intergovernmental Panel on Climate Change, and are based on a variety of factors, including potential world population growth, economic development and global commitment to sustainability. The first scenario would require some kind of mitigation and curtailment of greenhouse gas emissions, while the second would occur if emissions continued  to increase.

Both scenarios would result in significant temperature changes across the United States, according to NASA. The conservative scenario of 550 ppm could increase average U.S. temperatures by up to 4.5 degrees Fahrenheit (about 2 degrees Celsius) and the more extreme scenario of 800 ppm could heat the country up by 8 F (about 4 C). [Video: Dramatic Future U.S. Warming]

These results are based on data compiled from 15 different climate models, and use the average temperature from 1970 through 1999 as a baseline for comparison.

While the real outcome in 2100 remains unknown and will depend on a number of factors, including the amount of fossil fuels burned in coming decades, the latest research suggests that the more extreme scenario of 800 ppm is more likely.

"It seems from the most up-to-date literature that the higher emissions scenario is what we are going towards," said Laura Stevens, an NCDC scientist based at the Cooperative Institute for Climate and Satellites who was involved in creating the video. The 550 ppm scenario would require significant efforts to curb greenhouse gas emissions, Stevens said, and the country has not yet taken the actions necessary to follow this lower-emissions path.

By focusing the video on the United States, Stevens noted that these results may provide motivation for Americans to start thinking about adaptive strategies to prepare for change.

"These visualizations communicate a picture of the impacts of climate change in a way that words do not," Allison Leidner, a NASA scientist who coordinates NASA's involvement in the National Climate Assessment, said in a statement. "When I look at the scenarios for future temperature and precipitation, I really see how dramatically our nation's climate could change."

The average American emits about 20 metric tons of carbon dioxide into the atmosphere per year, according to climate scientist Michael Mann at Penn State University, who was not involved in the assessment.

"If you condensed all of that gas into solid form and placed it on a scale it would weigh the same as two large male African elephants," Mann told LiveScience. "That's the huge mass of carbon that each of us is, on average, putting into the atmosphere."

For comparison, Mann noted that the average emissions across the entire world are closer to 4 metric tons, which amount to the size of one baby elephant.

"If each of us could reduce our annual emissions to a small baby elephant, we'd go a long way towards making the cuts we need to stabilize carbon dioxide below dangerous levels," Mann said.

Mann remains optimistic that humans will rise to the occasion and take the steps necessary to reduce emissions, but said that the opportunity to do so is slipping away and that the time to act is now.

The final National Climate Report will provide three chapters that address ways in which humans can adapt to these significant changes, as well as the actions that people can take to slow the rate of change. A draft of the report is currently available to the public online.