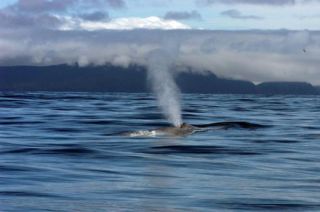 The blue whale is the largest animal known to ever live on Earth, weighing in at 330,000 pounds (150,000 kilograms) and stretching up to 108 feet (33 meters). Despite the whale's size, scientists have trouble locating and studying the cetacean in the vastness of the ocean, leaving many questions about the mammal's life history, particularly its mating and courtship behaviors.

Blue whales (Balaenoptera musculus) are found worldwide, with different regional populations forming distinct subspecies. Scientists believe they reach sexual maturity between 5 and 15 years of age, and have a gestation period that lasts 10 to 12 months. Mating and birthing take place during the winter, though the animals don't appear to have a set breeding ground, said Richard Sears, a cetacean researcher with the Mingan Island Cetacean Study.

Unlike other baleen whales, or those whales that use so-called baleen plates to filter tiny bits of food from seawater, blue whales typically travel alone. But in late July and early August, they begin to form pairs, where a male will follow a female around for weeks on end. "I think this pairing up is sort of like dating," Sears told LiveScience, adding that sex between the couple isn't a foregone conclusion. [See Stunning Photos of Whales]

Sometimes a second male will approach the pair, at which point the trio will take off in a kind of race along the surface of the water. It's unclear who initiates the race, but it's possible that the female does it to see which male is more physically fit, Sears said. During the race, the female's initial escort must keep up with his potential mate, while warding off advances from the other male — this sometimes results in physical contact between the males, including tail slashes and head-butts.

Blue whales are known to produce vocalizations, which likely have "some kind of reproductive function," said Catherine Berchok, a cetacean researcher with the National Oceanic and Atmospheric Administration. Berchok once recorded two males making loud calls to one another for 10 minutes while they were tailing a female, though such "contact calls" typically don't last nearly as long. Males also have a kind of song that may be used to court females, she said.

However, scientists don't know how a female chooses a mate.

Blue whale mating has never been documented, Sears said. As with other whales, it's probably a very brief encounter, with the male inserting his penis into the female's vagina for less than a minute. [The 7 Weirdest Animal Penises]

Interestingly, humpback whales, which are closely related to blue whales, are known to engage in threesomes, with two males penetrating a female at the same time. It's unknown if blue whales perform similar sexual acts.