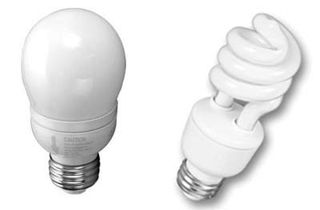 Fluorescent lamps, including compact fluorescent lights (CFLs), use about 75 percent less energy than incandescent bulbs and last six to 15 times as long, according to the U.S. Department of Energy (DOE).

But it's widely believed that these popular bulbs use a lot of energy to start up. So, is it more energy-efficient, then, to leave them on when a room is unoccupied?

The "in-rush" of electrical current that occurs when you flick on a fluorescent light lasts 1/120th of a second, and uses about the same amount of electricity as a few seconds of normal light operation. "Turning off fluorescent lights for more than five seconds will save more energy than will be consumed in turning them back on again," the DOE explains.

However, the lifetime of your bulb is affected by the number of times you turn it on and off. The real issue, then, is whether the electricity saved by turning off the lights can offset the cost of changing your fluorescent bulbs, which are more expensive than incandescent bulbs.

In light of these considerations, the DOE proposes a simple rule of thumb: Leave your fluorescent light bulb on if you will be out of the room for 15 minutes or less. Otherwise, turn the light off.