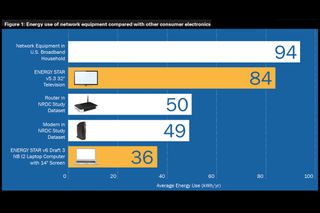 Small network devices consume as much electricity as a new TV and more than twice as much as a laptop. Source: NRDC's June 2013 Issue Brief: Cutting Energy and Costs to Connect to the Internet: Improving the Efficiency of Home Network Equipment.
(Image: © NRDC.)

Today, you can walk into a store and get a nice, big, flat-screen TV that uses one-third the energy of older models and has better features. You can get a powerful 14-inch laptop that uses a lot less energy than a machine built a few years ago — it has longer battery life and an even brighter display. But your high-speed modem and router — those little blinking boxes that you use to stream video, get email and zap a document to your wireless printer — could be eating up as much energy as your TV, and twice as much as your laptop.

At NRDC, we've worked with industry and government to help make home electronics more energy efficient, saving money for consumers and reducing carbon pollution from power plants. While the effort has made progress cutting energy waste from televisions, computers, gaming systems and power supplies, until now, no one had looked at the energy use of devices like modems and routers.

It's a good thing our team did. There are 145 million of these small network devices in U.S. households. These seemingly insignificant little boxes are always on — and they consume more than $1 billion and three dirty-coal power plants' worth of electricity each year, according to a new NRDC analysis. Cumulatively, those devices use as much energy as every household in Silicon Valley. At home, modems and routers can eat more energy than a new, energy-efficient 32-inch TV.

There's no need for the devices to guzzle power all day and night. Some manufacturers are already using power-scaling technology, which allows the device to use less power when it's just sitting around waiting to receive or send data, without sacrificing speed or convenience. Next year, these efficient modems and routers will bear the blue Energy Star label. You can find them on store shelves, or ask your Internet service provider to swap out your old device for an Energy Star model as part of your subscription package.

When you do so, you'll save money on your electric bill, and help reduce pollution from power plants. On a large scale, replacing old modems and routers with models that are among the 25 percent that are the most efficient in their category would save consumers $330 million on electric bills every year.

All this from a small tweak to a little black box. That's what's so great about energy efficiency — like those unassuming modems and routers, it's so humble, yet such a powerful tool. Energy efficiency puts money back in people's pockets, and it's the cheapest, cleanest, fastest way to reduce global-warming pollution.

This post is part of Lehner's Wasteland series, featuring people and organizations who are finding innovative ways to cut waste and save resources. Lehner's most recent Op-Ed was: Obama's Sensible Climate Plan: Boost Economy, Slash Emissions. The views expressed are those of the author and do not necessarily reflect the views of the publisher. This article was originally published on Live Science .