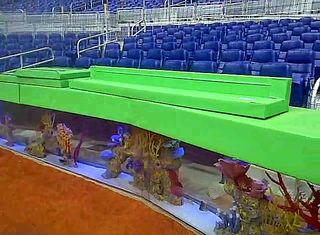 When people think of fisheries, they generally think of seafood. But there is another, surprisingly large fishery that has not made it into the headlines. Millions of people benefit from it, both financially and aesthetically, yet no international agencies are monitoring it — even though it may strongly impact coral reefs, the centers of ocean biodiversity.

That little-recognized resource is the ornamental fishery, which harvests fish and invertebrates for display in aquariums and as curiosities.

In a new paper on ornamental fisheries in the journal Fish and Fisheries, my colleagues and I note that the impacts of fisheries are not well understood, but they may be very large. The ornamental trade is focused on coral reefs, which are home to much of the world's marine biodiversity, and involves at least 45 source countries. Every year, this fishery removes an estimated 20 million to 24 million fish, many millions of corals and shells, and 9 million to 10 million additional invertebrates. [Colorful Creations: Photos of Incredible Coral Reefs]

Coral reefs are extremely productive and teem with colorful life . But they also use a lot of energy, and there is much competition and predation in reefs, thus resulting in relatively low, net biomass production. In contrast to cold, nutrient-rich waters that can support very high fishery yields, the warm, nutrient-poor waters typical of coral reefs are probably unable to sustain large harvests.

Researchers know that the fisheries that decline and collapse tend to be those that are not managed or assessed. Therefore, the first step toward a solution is to assess the status of ornamental stocks and the coral reefs that support them.

In our paper, my colleagues and I lay out a step-by-step approach for assessing and managing fisheries for which data are limited, and illustrate the methods using data from Indonesian fisheries.

The first step in that approach is to assess the status of an entire coral reef — not just the fish stocks — and develop conservation targets aimed at maintaining or restoring healthy reefs.

The next step is to estimate the vulnerability of the stocks and their degree of depletion. That information is combined in a decision matrix: For each category of vulnerability and depletion, a different set of management measures is appropriate. For example, for a highly vulnerable species that is also highly depleted, a ban on fishing may be appropriate, whereas for more resilient species that are less depleted, harvest might be increased to allow other, depleted stocks to recover.

Fishery managers can also use the decision matrix to prioritize stocks for more detailed assessments that can guide catch limits for high-priority stocks.

My colleagues and I hope this new analytical framework and management system will catch on before the ornamental fishery starts to generate headlines about a new fishery crisis.