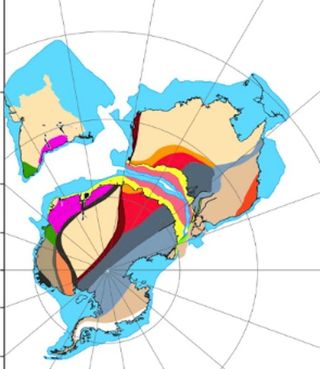 A new construction of Gondwana provides a better match between Australia, Antarctica and India. The colored polygons are geologic units that formed before the continents broke apart.
(Image: © White et al., Gondwana Research)

Scientists are a step closer to solving part of a 165-million-year-old giant jigsaw puzzle: the breakup of the supercontinent Gondwana.

Finding the past position of Earth's continents is a finicky task. But pinning down their wanderings plays a key role in everything from understanding ancient climate to how Earth's mountains and oceans evolved. Through "plate reconstruction" models, geoscientists illustrate how Earth's continents crunch together and split apart.

Before it cracked into several landmasses, Gondwana included what are today Africa, South America, Australia, India and Antarctica. The big continents — Africa and South America — split off about 180 million to 170 million years ago. In recent years, researchers have debated what happened next, as the remaining continents rocketed apart. For example, different Gondwana reconstruction models had a 250-mile (400 kilometers) disagreement in the fit between Australia and Antarctica, an error that has a cascading effect in plate reconstructions, said Lloyd White, a geologist at Royal Holloway University in Surrey, England.

"If Australia's in the wrong position by that amount, then when we try to build these models of what the Earth used to look like, it can have a flow-on effect around the globe," White told LiveScience's OurAmazingPlanet.

White and his colleagues decided to find out which of several models was best at fitting the continents together by testing them against all the available studies of Gondwana's geology. For Australia, Antarctica and India, they looked for geologic landmarks on the shorelines of each continent, like patterns on puzzle pieces, to precisely fit the continents back together. "We needed pinpoint accuracy, so we looked for faults," White said. Before Gondwana broke apart, the landmass stretched and thinned, leaving a series of matching faults and rift valleys on the continents.

With a series of computer models, the scientists tested various best fits for Australia, Antarctica and India against the compiled research data. The winner was an old-school approach, first published in the 1980s, White said. [Watch Australia and Antarctica drift apart]

White said he hopes the new synthesis will provide the building blocks for future work on Gondwana. "I hope that the majority will settle with our conclusions and see that this is good evidence for the older style of model," he said. "We as scientists don't always get things right, and it's important to go back and check if we're right or wrong every now and then."

The new study was published July 1 in the journal Gondwana Research.