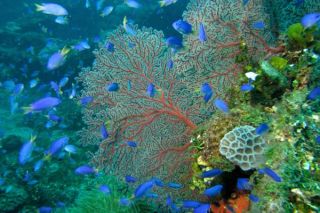 Coral reefs are not only beautiful, they are incredibly diverse ecosystems.
(Image: © Dan Norton | )

Because "she" spawns every fourth day, I knew she would spawn today. I rolled out of bed at the chime of my reliable Winnie the Pooh alarm clock, slid into my wetsuit, grabbed my underwater flashlight and stumbled into the kitchen at the Bellairs Research Institute in Barbados to make my coffee, proud to be awake even before the roosters announced the onset of dawn.

I kept a close eye on my watch because the time of first light changes each day, and if I arrived in the water even one second late, I would miss her.

As usual, my arrival at the beach coincided with the ebb of the late night beach parties; dawn breaks too late for the night partiers and too early for most others — but just right for her and me. I swam out along the reef with my flashlight off, enjoying the sight of bright green bioluminescent plankton parties and patrols of hunting squid and squirrelfish.

Because I had visited this location during so many night-to-dawn transitions, I easily found her home: a section of reef about the size of the jump-ball circle in the middle of a basketball court. But she was out of sight — probably still asleep in one of her territory's caves.

But a few minutes after my arrival, the first hint of sunrise cast just enough light for me to discern her shape as she emerged. Even though her abode was generously coated with delicious turf algae, she skipped breakfast and quickly and carefully made her way along the reef to the home of her mate. When she arrived there, her mate greeted her with a series of dips and other maneuvers. She then began laying her eggs on a nest he had already prepared for her.

Rather, while a female damselfish is away, her territory is completely undefended and vulnerable to invasions by other fish, including neighbors, who may scout it out for takeovers and steal her food. Therefore, the longer a female is gone, the more she risks losing "the house."

A cleaning station is a reef location that harbors cleaning organisms such as gobies and shrimp, which remove other organisms from the bodies of fish. Fish know the locations of these stations and presumably visit them in order to clean their bodies of organisms that are irritating them in some way, similar to the way that ticks or fleas irritate people.

A spawning stopover at a cleaning station lengthens a damselfish's absence from her own territory and thereby increases its vulnerability to invasions. So, how in the world do female damselfish solve this dilemma and minimize their risk of losing their territories during spawning?

D.L. Kramer of McGill University and I ultimately answered that question,  but in the process I discovered new questions that, taunting me, also begged for answers.

To answer that question, I had to identify what organisms are removed from the damselfish at cleaning stations. My efforts to do so led me to some generous colleagues — including George Benz, Alexandra Grutter, Isabelle Côtéand Nico Smit — who introduced me to the wonderful world of gnathiid isopods.

Gnathiid isopods are parasites . A parasite is an organism that lives on or inside a host organism without killing it and is dependent on its host for is survival.

Gnathiids are particularly unusual parasites because they only feed as larvae, and the only thing that gnathiid larvae eat is blood. Amazingly, adult gnathiids don't feed at all. But in terms of my research, the most important thing about gnathiids is that they serve as the primary food for cleaner fish.

Because of the dependence of cleaner fish on gnathiids, I knew that I needed to learn more about gnathiids in order to better understand the relationship between cleaner fish and damselfish.

I studied gnathiids by placing a group of fish on a section of a reef in little fish hotels (cages), and measuring their gnathiid loads every two hours over a 24-hour cycle. My results revealed that the fish carried the heaviest gnathiid loads at night and at dawn.

These results suggest that when damselfish wake up in the morning, they probably have relatively heavy gnathiid loads. Morning irritation from these loads probably drives the infested damselfish to cleaning stations, where cleaner fish — eager to feast on their favorite food — reduce their gnathiid loads. So to a damselfish, a morning visit to a cleaning fish probably feels much like a morning shower.

These results indicate that gnathiids exert a significant influence on the daily activities of reef fish and are therefore major players in reef ecology.

But gnathiids are also potentially important for other reasons. For example, their land-based counterparts are ticks and mosquitoes, which transmit microorganisms that cause Lyme disease and malaria. Likewise, gnathiids in Australia, South Africa and Europe appear to transmit various blood-borne parasites.

So after solving the mystery of the damselfish's morning cleanings, and still fascinated by gnathiid, I moved on to a new question: Do the gnathiids of the Caribbean transmit diseases? As you may imagine, hundreds of researchers are currently studying the biology of ticks and mosquitoes, but only a handful are studying the biology of gnathiids. So, the answer is … WDK (we don't know).

Even though the oceans occupy the majority of the planet, scientists know far less about environmental factors that cause disease transmission in oceans than on land. To increase our knowledge of this important topic, the National Science Foundation has generously supported my team's efforts to understand the links between changes in Caribbean reef environments and the spread of blood-borne parasites by gnathiids.

This meant that, to cover all of our bases, we had to sample fish from multiple locations. We were on a Caribbean treasure hunt ! All told, we collected more than 1,500 fish of varied species from five Caribbean islands.

Because the parasites we sought reside in … you guessed it … blood, we had to anesthetize each fish (without killing it), draw a little blood from it and preserve collected blood on a slide. We then shipped our samples to my collaborators, Nico Smit in South Africa and Angela Davies in the U.K. — both of whom have years of experience looking for blood parasites in fish, a complicated task.

Taking it to the Streets

I was about to leave for a session of Sea and Learn in Saba — a pristine Caribbean island. As a scientist, I appreciate the importance of sharing science and research with non-scientists, so I contribute to the Sea and Learnprogram, which regularly brings scientists to the island to deliver presentations to the community, conduct workshops with local K-12 students and involve non-scientists in research.

Just before my departure, I received a game-changing email from Nico. Nico's email said that — Hooray! — one of our slides had tested positive for blood parasites. So, who were the lucky infectees? You guessed it … damselfish. Also included in Nico's email were photographs that I could share with Sea and Learn. Stoked!

Science can take you on a wild roller coaster ride, with thrilling surprises and uncertainty around almost every turn.

From Saba, I high-tailed it to nearby St. Maarten, which has a particularly large population of damselfish. I am currently the chair of an excellent St. Maarten-based environmental organization called Environmental Protection in the Caribbean, which helped arrange for me to work with Tadzio Bervoets of the St. Maarten Nature Foundation to collect blood samples from damselfish.

My research team and I are still collecting and analyzing blood samples from damselfish from several Caribbean islands in order to:

Our latest results reveal that damselfish from St. Maarten and Saba are infected with blood parasites. We hope that additional sampling will help us determine who is spreading these parasites.

In addition, my research team and I are collecting and analyzing blood samples from various types of Caribbean fish besides damselfish. In doing so, we have discovered many new species of blood parasites that have not yet been scientifically described and named. More grist for future research!