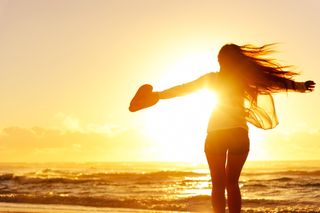 WASHINGTON — The age-old wisdom that being near the seaside is good for your health may be true, studies suggest.

People often focus on the threats the ocean poses to human health, whether it's storms and floods, harmful algal blooms or pollution. But research shows that spending time by the ocean has many positive effects on health and well-being, epidemiologist Lora Fleming of the University of Exeter in England, said here on Wednesday (June 26) at a science policy conference of the American Geophysical Union.

The notion that being near a beach makes one feel healthy is not new, of course. Doctors were prescribing trips to the shore or visits to "bathing hospitals" — special clinics that offered seawater bath treatments — as early as the 18th century. But only recently have scientists begun studying the ocean's health benefits experimentally, Fleming said.

Fleming's colleagues at the University of Exeter's European Centre for the Environment and Human Health have begun a project called "Blue Gym" to study how natural water environments can be used to promote human health and well-being. [Stunning Sands Gallery: A Rainbow of Beaches]

When you put a person in a beach environment, "It's not going to be any great surprise to you that people relax," said study researcher Mathew White, an environmental psychologist at Exeter. The question, he said, is how many people experience such health effects, and how much they impact people's health.

White and colleagues have also looked at census data in England to see how living near a coast affects people's health. They found that people who lived closer to the coast reported better health.

It's possible that the people living closest to the coast are simply wealthier and have better access to health care. But the study found that the health benefits of ocean proximity were greatest for socioeconomically deprived communities.

The researchers also looked at the effect of moving near a coast. Moving closer to the sea "significantly improves people's well-being," White said — by about a tenth as much as finding a new job. The seaside environment may reduce stress and encourage physical activity, he added.

The researchers are now doing lab experiments to study the physiological benefits of coastal life. In the experiments, people in stressful situations, such as dental surgery, look at either a virtual beach, or the dental room. The trial is ongoing, but early studies suggest people report feeling less pain when immersed in a beach setting.

These studies suggest ocean exposure could be a useful form of therapy, Fleming said. For instance, surfing might improve the well-being of troubled kids, she said.

Still, many questions remain. Future studies will need to consider whether children and other populations show the same benefits from coastal living, what the optimal "dose" of time spent at the ocean might be, and how long the health effects last.

It also remains unclear how growing human communities might affect the beach environment. It's not going to be so great if everyone starts moving to the beach, Fleming said.