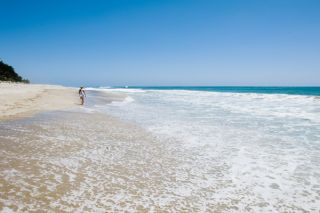 When I started visiting our Santa Monica office, I was thrilled to get up early (I was on East Coast time) and go down to the beach to body surf. It was well worth braving the cold water, because sometimes a dolphin or sea lion would join me. My California colleagues, however, were not so enthusiastic about my morning swim. Polluted water from storm drains, they warned me, contaminated the beach in some places. Rashes, pinkeye, stomach bugs, respiratory infections, meningitis, hepatitis — any one of these can strike an unlucky beachgoer who gets into dirty water. In fact, researchers have estimated that across Southern California, anywhere from 600,000 to 4 million beachgoers come down with a gastrointestinal ailment each year.

I'm still swimming in Santa Monica; the city does a better job in controlling beach pollution than most places. But water pollution is a persistent and widespread problem at our ocean, gulf and Great Lakes beaches. According to NRDC's annual beach report card, Testing the Waters, American beaches had to close or post swimming advisories more than 20,000 times last year.

Most of those closings were due to high levels of bacteria in the water, an indicator of contamination from human and animal waste. For eight out of the past nine years, beach closings and advisories have topped the 20,000 mark. It's high time we took action to protect beach goers and keep pollution out of our waters.

The biggest known source of beach pollution isn't trash from careless litterbugs on the beach — oddly enough, it's rain. In today's heavily paved, concrete environment, rainwater doesn't soak back into the ground or evaporate back to the air as it should. Instead, it flows off the hard surfaces of streets, driveways, parking lots and rooftops, picking up dirt, garbage, pet waste, motor oil and other pollutants, and carrying them straight into the nearest ocean, lake or stream. This stormwater can also overwhelm sewer systems and trigger the discharge of sewage — hundreds of billions of gallons of mucky water every year — into waters where people swim. It can take as little as a half inch of rain in to cause discharges some places.

Several forward-thinking cities around the country, including Philadelphia and New York, are starting to tackle this pollution with innovative "green" infrastructure. Rather than building more tanks, pipes and tunnels to contain and control dirty water, these cities are turning to greener solutions that allow rainwater to do what it's supposed to do — evaporate into the air or soak back into the earth. Plantings on rooftops, roadside trees, parks and other greenery, porous pavements, wetlands and rain barrels all trap stormwater where it falls, and let it evaporate or filter into the ground instead of becoming a conduit for pollution.

Tackling stormwater with green infrastructure represents a major shift in thinking on the part of city officials. I can vouch for this from my years of experience working on clean water issues as an environmental attorney, both at NRDC and in city and state government. The engineers who run water and sewer systems tend to think, understandably, that the solution to all water problems lies in steel and concrete. When we worked to preserve and expand a series of wetlands and streams in Staten Island as a replacement for storm sewers — the Bluebelt — engineers were highly skeptical. But they were convinced when the project successfully moved water as well as cleaned it, at a lower cost than building out tanks and pipes.

As we've seen on Staten Island and elsewhere, green infrastructure really works. But, most of the country is still very much behind the curve in implementing this cost-effective pollution control. The EPA has a major opportunity to drive the growth of additional green infrastructure nationwide, as the agency revises its standards for stormwater management.

The long-awaited revisions could, and must, establish clear standards for retaining stormwater on buildings, roads, parking lots and other developed sites. These standards will create incentives for the development of more rain-soaking green infrastructure across the country. It's not only a cost-effective way to reduce water pollution at the country's beaches and elsewhere, green infrastructure also improves neighborhoods by adding green space, cooling and cleaning the air, reducing flooding and enhancing local water supplies.

If you're going to the beach this summer, stay safe. Check NRDC's beach map to find water quality information from your favorite beach. You can also see how officials effectively protect swimmers through frequent monitoring and timely reporting on water quality issues. NRDC also issues star ratings for 200 popular beaches; 13 beaches earned five stars this year, while 11 landed on our repeat offenders list.

No matter where you're headed, avoid swimming for 24 hours after it rains and 72 hours after a heavy rain; stay away from drain pipes, and if you have kids, teach them to never swallow water while swimming. Kids seem to be far more prone to getting sick at the beach, in part because they're more likely to duck their heads under and drink water.

If you're rolling your eyes about staying out of the water for a whole day after it rains — one day might be all the time you have at the beach, after all — then consider this. Swimming advisories posted at the beach might not give you the whole story. The EPA recently revised its 25-year-old standards for beach-water quality — and made them weaker. The new rules allow bacteria levels to exceed standards as much as 10 percent of the time before triggering a violation, and make it acceptable for 1 in 28 swimmers to get sick with gastrointestinal illness.

That's a like a school saying it's OK for one kid per class to vomit or get diarrhea after eating lunch.

This is not OK. The EPA's job is to protect public health, and their standards for beach-water quality should be strong enough to keep swimmers safe. We've put the EPA on notice that we may be forced to take them to court if they don't address these problems soon.

The agency also needs to drive more solutions, like green infrastructure, that can keep pollution out of our beaches and turn rainwater into a resource, not a pollution source. Tell the EPA to keep pollution in check and protect our beaches.