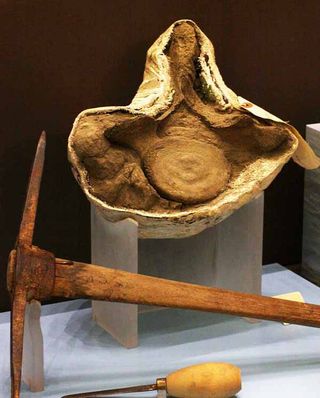 Fossil-collecting tools and an opened field jacket are a few of the items on display at the "Whales: From Bone to Book" exhibit.
(Image: © Smithsonian Institution)

Abby Telfer is manager of the Smithsonian National Museum of Natural History's FossiLab. This article was adapted from her post on the blog Digging the Fossil Record: Paleobiology at the Smithsonian, where this article first ran before appearing in LiveScience'sExpert Voices: Op-Ed & Insights.

The Smithsonian has a long history of research on whales and their kin, both living and extinct.

"Whales: From Bone to Book"is a new temporary exhibit at the National Museum of Natural History celebrating that history. Nestled among archival photographs from the field, early-20th-century pen-and-ink illustrations, rare books, modern research papers and other items are several fossils. One, a whale vertebra collected in Maryland, had to "audition" for a place in the exhibit by going through a CT scanner.

Why that brush with modern medical technology? The exhibit plan called for a whale bone encased in a field jacket — a hard plaster and burlap cover similar to a cast a doctor would use to protect a human bone after injury. The encased whale bone would illustrate how a fossil, still surrounded by the rock or sediment in which it was found, is protected from damage during its journey from the excavation site to the museum. The jacket would be displayed open, with the bone partially exposed.

In the museum basement, the field jackets scientists collect on location are stored until the bones within them can be extracted from the surrounding rock matrix. A visit there yielded a dozen candidates small enough to fit into the exhibit case. But, from the jacket labels, it wasn't clear which would make the best addition to the exhibit.

Nick Pyenson, curator of fossil marine mammals for the Smithsonian's Department of Paleobiology, and Lisa Franzen, a FossiLab volunteer who would prepare the fossil and jacket for exhibit, sent the jackets for analysis by a CT scanner located in the museum's Department of Anthropology. In one scan, the ghostly image of a nearly intact vertebra stood out, allowing Pyenson and Franzen to choose that jacket while remaining confident the bone inside would be interesting to look at. The vertebra, collected in Maryland, is about 15 million years old and probably is from a baleen whale.

Once the jacket was cut open, Franzen removed just enough of the soft matrix to reveal the beautiful vertebra inside. She mended breaks in the bone and stabilized it with a vinyl adhesive so that it wouldn't be harmed by humidity or vibration during its time on display. When the temporary exhibit closes in 2014, preparators will remove the rest of the matrix, and the vertebra will be placed in the Smithsonian's collections, where they will be available for scientific study.

"Whales: From Bone to Book" was co-curated by Nick Pyenson and Mary Parrish of the Smithsonian's Department of Paleobiology, and the Smithsonian Libraries. The exhibit is located in the Evans Gallery, on the ground floor of the National Museum of Natural History, off the Constitution Avenue Lobby. It will remain on display through April, 2014.

The views expressed are those of the author and do not necessarily reflect the views of the publisher. This article was originally published as Whales: From Bone to Book, with the Help of a CT Scanner on the blog Digging the Fossil Record: Paleobiology at the Smithsonian.