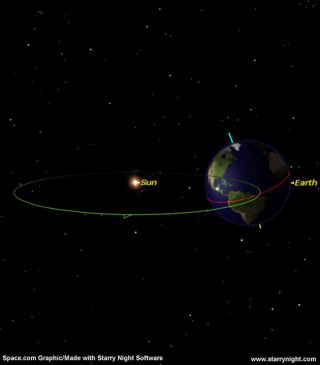 The sun will reach the point where it appears to shine farthest to the north of the equator, over the Tropic of Cancer, today (June 21), marking the moment of the summer solstice — the start of northern summer.

Since Dec. 21, the altitude of the midday sun has been shifting progressively higher in the sky as its direct rays have been gradually migrating to the north. It reached its peak at 1:04 a.m. EDT (0504 GMT), marking the summer solstice.

The sun's altitude above the horizon at noontime is 47 degrees higher now, compared to six months ago. As we often mention, your clenched fist held at arm's length measures roughly 10 degrees, so the sun at midday is now nearly "five fists" higher in the southern sky compared to Dec. 21. [Solar Quiz: How Well Do You Know the Sun]

From temperate latitudes, the sun can never appear directly overhead. From New York, for instance, on Friday at 12:57 p.m. EDT (1657 GMT), the sun will attain its highest point in the sky for this entire year, standing 73 degrees above the southern horizon. Since the Sun will appear to describe such a high arc across the sky, the duration of daylight is now at its most extreme, lasting 15 hours and 4 minutes.

During the year varying amounts of sunlight strike different regions of the planet and as a consequence both the angle of the sun's path across the sky and the number of hours it is above the horizon change significantly. If the total energy received from the sun — known as insolation — alone governed the temperature, we should now be experiencing the year's hottest weather.

But the atmosphere in temperate regions continues to receive more heat than it gives up to space, a situation that lasts several weeks or more. A reverse process occurs after the winter solstice in late December. Thus, there is a temperature lag of roughly about a month: Our hottest weather usually comes in late July and our coldest in late January.

This story was provided by SPACE.com, a sister site to Live Science. Joe Rao serves as an instructor and guest lecturer at New York's Hayden Planetarium. He writes about astronomy for Natural History magazine, the Farmer's Almanac and other publications, and he is also an on-camera meteorologist for News 12 Westchester, N.Y. Follow us on Twitter, Facebook and Google+. Original article on SPACE.com.