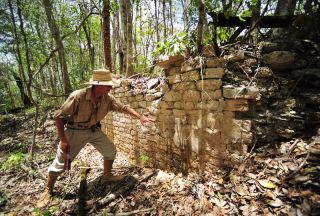 An entire Maya city full of pyramids and palatial complexes has been discovered in a remote jungle in southeastern Mexico, archaeologists report.

Covered in thick vegetation, the ruins were found in Campeche, a province in the western Yucatán peninsula that's littered with Maya complexes and artifacts. The newfound site is dubbed Chactún, and it stretches over roughly 54 acres (22 hectares). Researchers think the city was occupied during the Late Classic Maya period, from roughly A.D. 600 until A.D. 900, when the civilization mysteriously collapsed.

"It is one of the largest sites in the Central Lowlands, comparable in its extent and the magnitude of its buildings with Becan, Nadzcaan and El Palmar in Campeche," archaeologist Ivan Sprajc said in a statement from Mexico's National Institute of Anthropology and History (INAH).

In the sprawling Maya city, Sprajc and his team found three monumental complexes with the remains of pyramids — one 75 feet (23 meters) high — as well as ball courts, plazas, homes, altars, bits of painted stucco and stone slabs known as stele. Epigraphers are still poring over inscriptions at Chactún, but one stele refers to an apparent ruler named K'inich B'ahlam, the researchers say.

Traces of the lost city were first spotted in aerial images of a vast forested area, which previously had only been explored by loggers and rubber-tappers and was considered "a total blank" in the map of Maya sites, Sprajc said.

"With aerial photographs examined stereoscopically, we found many features that were obviously architectural remains," Sprajc explained in a statement from INAH. "From there we took the coordinates and the next step was to locate the ancient alleys used by tappers and loggers to reach the area."

Sprajc and his team could only get to the site by traveling through the jungle in a truck with four-wheel drive, stopping every now and then to hack vegetation blocking their path with a machete.

Archaeologists hope studying Chactún will shed light on its connection to other nearby Maya cities, according to INAH.