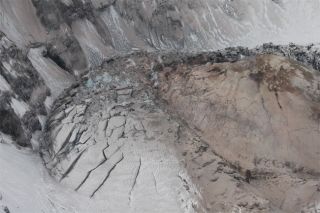 The new dome rises and moves south, cracking and uplifting this glacier, which is forced against the south wall of the crater.
(Image: © USGS/Jim Vallance and Matt Logan)

SAN FRANCISCO -- An unusually smooth and swiftly growing lava dome within the crater of Washington state's Mount St. Helens volcano is an extraordinary and perplexing event with an unknown outcome, geologists said Tuesday.

The dome has been building at a steady clip for about two months now as molten rock boils up from deep below. While no major eruptions are expected in the near term, the dome's construction can be likened to a runaway freight train in terms of the steady forces involved, scientists said.

"There's a truckload of hot rock coming out of the mountain every second," said Dan Dzurisin of the U.S. Geological Survey. "We're scratching our heads about it."

Dzurisin and others presented the latest data on the volcano here at a meeting of the American Geophysical Union this week.

When Mount St. Helens blew its top in 1980, it left a mile-wide crater. Over the next six years, a dome of lava built up in the middle of the crater. Then the volcano went quiet. The dome became partly buried by a glacier that's more than 600 feet deep in places.

Then a swarm of earthquakes this September signaled new activity. The original dome inside the crater grew a welt on its south side. That welt quickly became a separate dome. It looks different, part of it being as smooth as an overturned ship. It is now bigger than an aircraft carrier, with a central head protruding above two shoulders.

Inside a crust about 10 meters (33 feet) thick the dome is loaded with magma, scorching molten rock. The whole structure is pushing its way south as it grows, "bulldozing its way into the glacier," Dzurisin said, "shoving it out of the way, cracking it, lifting it."

The scene looks a bit like a train wreck, with colossal chunks of ice angling in every direction.

John Pallister has been down there. More than once. He gets dropped off by helicopter so he can explore the dome up close, touch it.

"It's a rather dramatic terrain," said Pallister, also with the USGS. He's chipped away at the steep sides of the dome -- vertical as a spine in some spots -- which he says probably inches up a tiny bit with each new minor earthquake. Scientists have never watched such a natural construction project unfold and in such detail.

On Nov. 4, Pallister and colleagues used special tools to grab hot rocks from the dome. The magma has a pasty quality, he said. When it reaches the surface, it is cooler than the magma that poured out in 1980. That suggests there's a deep well of magma 4 to 7 miles (7-12 kilometers) down that has been rising and cooling since 1980. The geologists now think there's a secondary pool that is trapped about 1 to 2 miles (2-3 kilometers) below the crater, and that pool is now responsible for the dome building.

Scientists don't know what the mountain has in store. Studies of other domes suggest the current activity could last another couple months or many years, said USGS researcher Cynthia Gardner.

"We don't know exactly where this could go," Gardner said.

An eruption like 1980 is not expected. But if the dome continues to rise, it could eventually collapse, causing magma and ice to mix and releasing a large ash cloud up to 40,000 feet (12 kilometers), an event that would affect airline travel in the region and possibly populated areas downwind.