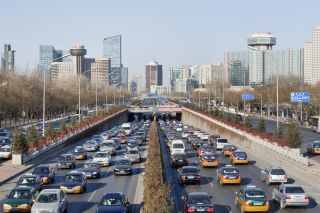 Better fuel efficiency will be crucial to the health of the environment as world car ownership increases, especially in China and India. This photo shows traffic near Beijing's 3rd Ring Road.
(Image: © TonyV3112 / Shutterstock)

Chris Busch is director of research at Energy Innovation: Policy and Technology, where here he leads work on urbanization in china and unconventional natural gas. He contributed this article to LiveScience's Expert Voices: Op-Ed & Insights.

It's a little bit counterintuitive that an approach based on wide avenues could lead to traffic jams, but the superblock pattern pushes people toward dependence on car travel, and then funnels all of that traffic onto a few main roads. Superblocks typically do not offer smaller connecting routes. Without secondary roads, all traffic — local and longer distance — ends up on a few existing avenues. Very wide avenues become quickly congested, guaranteeing traffic paralysis at even low population densities (for more on that topic, read Peter Calthorpe's "Urbanism in the Age of Climate Change").

Whether China's cities are paragons of livability and environmental quality matters greatly for China's urban residents. China is experiencing the fastest urbanization the world has ever seen — it's a lot of people, and a number growing at an incredible pace. Correcting superblocks also presents an opportunity for the global environment. Done right, China's cities can set a new standard for sustainable urban development and help to stabilize the world's climate .

The Chinese leadership is keenly aware of the need for solutions, and is supporting sustainable urbanization in words, actions and with resources. This is not a story of painful trade-offs: These solutions bring both economic and environmental benefits. Sustainable cities bring about a harmonious convergence of many traditional Chinese urban design characteristics and emerging international best practices. Projects throughout the country already showcase the best practices in sustainable urban form, as well as the practical benefits they deliver.

The solution to superblocks is mixed-use and transit-oriented development with public transit as the city backbone. Filling out such an urban transportation network is a rich mix of small streets, bike paths and a few pairs of arterial one-way streets that can really move traffic. This urban network supports walking and biking as enjoyable alternatives for short trips, and it offers a high-quality public transit system that is comfortable, clean and convenient.

Bus Rapid Transit (BRT) offers the best return on investment in the public-transit sphere. BRT moves people at underground subway speeds at a small fraction of the construction cost, and the systems can be built quickly. Construction costs are 90 to 95 percent lower than an underground system, though BRTs must be actively maintained and operated once they are built. Built in nine months, the Guangzhou BRT system carries more than 800,000 passengers per day, more than most metrorail systems. After the opening of Guangzhou's BRT system, average bus speeds increased from about 15 km/h to about 22 km/h, and overall traffic speeds increased by 15 percent on average. Underground subways make sense for the biggest and most densely populated cities, but BRT provides an attractive alternative in most places.

A variety of commercial, retail and residential options makes walking more interesting, pleasant and convenient. Since more goods and services are available locally, mixed-use development creates accessibility. This local product and service availability means people can walk to shopping, dining and recreation, resulting in reduced car travel. The relationship between mixed-use neighborhoods and fewer car trips is a well-established tenet of urban planning.

Another hard-earned lesson in urban development is that building more and bigger roads is not the way to solve traffic congestion . In an autocentric city already suffering from clogged roads, there are always additional people who would be willing to drive if the option was more convenient. As soon as new road capacity is added, new drivers crowd onto the road. This reservoir of people ready to crowd onto the roads is called "latent demand" by urban planners.

The U.S. faces similar congestion problems, though on a smaller scale, and is increasingly embracing these same solutions. Unfortunately, the only option for the U.S. is the more costly choice of rebuilding its cities instead of building them right the first time. But the trends toward transit, walkability, density and mixed use are clear. Americans are driving less and mixed-use walkable areas in urban centers have emerged as the most desirable neighborhoods — as indicated by property values.

Those shifts, away from preferences for car travel and suburban living, are most pronounced among young people. Consider the example of California, long known for having a love affair with cars. California now has a statewide smart growth plan that is advancing exactly the solutions advocated here. The state's largest city, Los Angeles, is rapidly building up its public transit system after years of being one of the most car- dependent cities in the United States. Sixty-eight kilometers of BRT exist today with plans under development for more.

China should learn from the United States' experiences and mistakes (and vice versa). China's challenge is to build upon the current momentum to achieve these solutions on a scale that can measure up to the incredible speed and scope of Chinese urbanization.