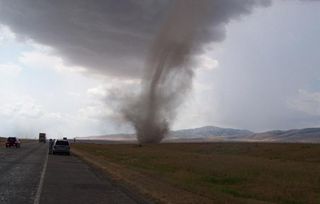 Tornadoes hit a given location just once in 5,000 years, on average. For most inhabitants of the southwest Missouri town and the rest of Tornado Alley, those odds are too low to justify the added expense that today's fortifying materials tack onto the price of a home.

"It adds about 3 to 6 percent of the construction cost of a house to use a construction method called insulated concrete forms, or ICF," said Matt Morrow, chief executive of the Home Builders Association of Greater Springfield, Mo., whose domain includes Joplin.

With ICF construction, which is currently the best tornado-resistance construction method, the walls of a house are built out of hollow Styrofoam blocks with 6 inches of concrete poured inside.

"It's an available option, but given what the odds are of taking a direct hit by a tornado, people ask themselves, 'Is this something I want to invest in?'"

And investing in ICF doesn't solve all your problems: The frame of your house might survive a twister attack, but the roof and windows would remain vulnerable.

"Even with ICF, if you take a direct hit by a tornado, you're still going to sustain significant damage, and the roof will probably come off," Morrow told InnovationNewsDaily. "Once that happens, the people are out. The vortex will suck you right out of there."

Roofs are the weakest links, and engineers are struggling to figure out how to lock them down during twisters. Hurricane clips, a product used in coastal regions to attach the roof of a house to the main structure, have not proven effective against tornadoes.

"The difference is that hurricane clips are resistant to straight-line winds. Hurricanes are large enough that, at any given point, the wind moves approximately in a straight line. But a tornado is narrow compared to a hurricane, and it’s a twisting wind," Morrow said. Twisting winds rip roofs right off. [Read: Why Aren't There Tornado Safety Building Codes?]

The challenge of protecting people and homes in Tornado Alley is as much about economics as about engineering. ICF can fortify a house but it can't protect a mobile home.

"Approximately 60 or 70 percent of fatalities during tornadoes happen in housing, and more than 50 percent of those who die in housing die in mobile homes," said Tim Reinhold, chief engineer at the Institute for Business and Home Safety, in Tampa, Fla.

Whereas most homes get torn off their foundations only by a direct tornado strike, mobile homes can come loose from lighter winds farther away from the funnel.

However, many states that are hit most often by tornadoes are also the poorest, and "for most mobile home residents, it's an affordability question," Morrow said.

While Zone 3 mobile homes, which are built solidly enough to withstand hurricanes, would be better at withstanding a nearby tornado. But according to Reinhold they cost 20 to 25 percent more than regular (Zone 1) mobile homes. Anchoring them with concrete would cost an additional $2,000.

Considering the costs, Reinhold said, "Out of 100 mobile homes in Florida, only two will be anchored-down Zone 3 homes, and I don't think I've ever seen it done in Tornado Alley."

Keeping in mind the tight budget of many Tornado Alley inhabitants, what are the most worthwhile options?

"We have come up with ideas for what someone would do with $500 or $1,000," Reinhold said. "We suggest that people pick an interior room with no windows, take the Sheetrock off that room and put five layers of three-quarter-inch plywood glued and screwed to the walls and studs. That would make a safer place to go in your house."

For $5,000 to $7,500, you can build a safe room — a shelter either in the basement or an interior room of a house that is fortified with concrete and steel and can withstand the impact of a two-by-four piece of wood flying through the air at 100 mph."

The future of tornado safety

One affordable option that may someday find use is called Concrete Cloth. Originally designed for military bases, Concrete Cloth is a cement-impregnated fabric that works in the same way as a plaster cast, except on a larger scale.

A giant spool of the material is rolled out around a hastily constructed frame; then the fabric is sprayed with water to set off a chemical reaction. Drying results in a low-profile structure that may be strong enough to resist the harsh winds of a tornado, according to Bradley Quinn, author of "Design Futures," a new book on advanced materials. Concrete Cloth may someday be able to provide communal shelters for residents of trailer parks, although likely at additional cost to residents. [Read: Futuristic Materials Could Build Tornado-Proof Homes]

Options for fortifying the roofs of traditional homes will eventually emerge as well.

"I think in the future there will continue to be innovations that make buildings safer during storms," Morrow said. "As human beings, we've made incredible advances in construction technology . But we're not gods."