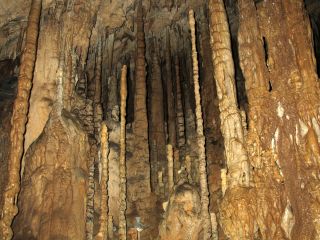 The rare view into past rainfall patterns in the tropics fills a gap in global climate history during a crucial period. Ice cores in Greenland and Antarctica have revealed rapid swings in Earth's climate in the last 100,000 years in the high latitudes. By studying stalagmites in Borneo, in the western Pacific Ocean, researchers at Georgia Tech now know how the tropics responded to the sudden climate shifts. The team discovered some of the abrupt changes did not affect the region, according to a study published today (June 6) in the journal Science Express.

"We found [some] of these events were captured in our stalagmites, but most them, especially the abrupt shifts toward warming called Dansgaard-Oeschger events, we do not see," said Stacy Carolin, lead study author and a geochemistry doctoral student at Georgia Tech. "There's something going on that's not reaching the tropics, or the tropics are doing something that is causing the response to be different," she said.

Stalagmites are towers of calcium carbonate, a mineral left behind from water dripping through soil and rock above the cave. The cone-shaped pillars grow slowly over thousands of years, layer by layer, preserving a record of carbon and oxygen isotopes (atoms of the same element with a different number of neutrons) that indicate how much rainfall there was when the layers formed.

The Borneo stalagmites reveal that the rainfall patterns in the region did not shift during Dansgaard-Oeschger excursions. These events are sudden warmings during glacial periods, about 9 to 27 degrees Fahrenheit (5 to 15 degrees Celsius) in about 10 to 20 years, recorded in ice cores. There are 25 known Dansgaard-Oeschger excursions, which repeat every 1,500 years or so.

But the tropical rainfall did dry up during the rarer Heinrich events. Another rapid high-latitude climate shift, Heinrich events are thought to be triggered by large ice sheets or fresh glacial meltwater cooling the North Atlantic about every 10,000 years. There are six Heinrich events seen in ice cores.

The different climate record in the tropics during glacial periods suggests the global response to climate shifts is more complicated than recognized, the researchers said.

"Ultimately, we'd like to be able to reproduce the global signatures of these abrupt climate events with numerical models of the climate system, and investigate the physics that drive such events," study co-author Kim Cobb, a paleoclimatologist at Georgia Tech, said in a statement.

The researchers also discovered a 1,000-year dry period triggered by the supereruption of Sumatra's Toba volcano 74,000 years ago.

"This was the largest eruption in the past 2.5 million years," Carolin said. "Usually, volcanic winters last a few years to 10 to 20 years, but this dry period lasted for a millennia."